IPL 2018: Kolkata Knight Riders, with history and form on their side, start favourites in Eliminator against Rajasthan Royals

IPL 2018: Kolkata Knight Riders, with history and form on their side, start favourites in Eliminator against Rajasthan Royals 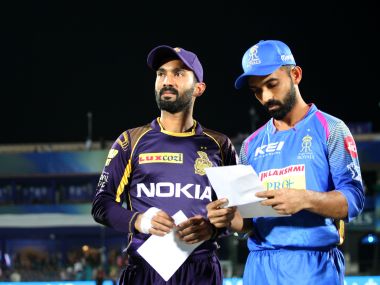 Kolkata: The name resembles a World Wrestling Entertainment (WWE) bout; suggestive of the imminent end and turgid with a looming premonition. However, when Dinesh Karthik and Ajinkya Rahane lead their teams in the Eliminator at the Eden Gardens later this evening, only one of the two captains would be walking with the swagger of a prize-fighter. Such has been Kolkata Knight Riders’ (KKR) dominance over Rajasthan Royals (RR) this season and so strong a citadel has Eden been for them, that despite all the glorious uncertainties the game offers, it is tough to look beyond the hosts for this playoff.

The visitors have been significantly weakened by the departure of their leading run-scorer Jos Buttler and season’s most expensive foreign buy Ben Stokes, who took three wickets when the teams last met. In their absence, Sanju Samson, with 391 runs to his name, will hold the key for RR as far as batting is concerned. Rahul Tripathi, whose unbeaten 80 against Royal Challengers Bangalore (RCB) last week reprised some of the form he showed in his breakout IPL season in 2017, will be another key batsman for the Royals, as will be the late-overs six-hitting abilities of Krishnappa Gowtham. The off-spinning all-rounder, in fact, is the only batsman to have a strike-rate of over 200 this season.RR’s awful record here does little to offer hope. They have lost their last six matches at Eden, and their only win here came in 2008 — the year they won the title. This year, they lost both their league matches to KKR; in Jaipur, they lost by six wickets and in Kolkata, they were mauled by seven wickets. However, history holds little significance in Twenty20 (T20) cricket, where mastering major moments becomes a pre-requisite for a favourable result.

Their biggest worry though will be the form of their skipper. 324 runs from 14 matches at a strike-rate of 119.11 doesn’t do justice to Ajinkya Rahane, whose touch-play and technical correctness have strangely deserted him in a season where other traditionalists — KL Rahul, Virat Kohli, Kane Williamson — have enjoyed success. RR are admittedly light in the middle order, and that’s where KKR’s spin troika of Sunil Narine, Kuldeep Yadav and Piyush Chawla would want to capitalise.

KKR’s batting, meanwhile, relies a lot on the initial ballast of Sunil Narine and Chris Lynn. While Lynn has slowly slipped into his groove, Narine has been a decimator throughout the season, as his strike-rate of 189.01 — third highest of the league — and 22 sixes from 14 innings illustrate. Robin Uthappa, Shubman Gill, Nitish Rana, and Dinesh Karthik form a dependable middle-order and in Andre Russell, KKR have a mean six-hitting machine to instill trepidation in opposition ranks. Karthik, in fact, has been a revelation this season. His 438 runs make him KKR’s top scorer, and six unbeaten innings are a testament to his finishing abilities.

Karthik’s leadership has also been spot-on, and the fact that KKR made to the playoffs after losing five of their first seven games speaks of their self-belief. The home team has persisted with playing three spinners quite regularly, and a combined haul of 41 wickets means the move has reaped dividends. In their most recent meeting, Kuldeep Yadav prised out four wickets for 20 runs against RR to mark a return to form.

Among the pacers, while young Shivam Mavi has been expensive, Prasidh Krishna has been impressive. The 22-year-old Karnataka pacer was a last-minute addition to the KKR squad after injury ruled Kamlesh Nagarkoti out of the competition, and he has grabbed the opportunity well. He has taken nine wickets in five matches he has played this season, and only once has he returned wicket-less. In his last game, he took four wickets against Sunrisers Hyderabad to seal a playoff berth for KKR.

For RR, Jaydev Unadkat and Dhawal Kulkarni have been quite underwhelming, and they would rely on a spin trio of their own to beat KKR at their den. Gowtham, Shreyas Gopal, and Ish Sodhi have picked 24 wickets collectively, but the gap in quality between the two teams is for all to see, and had it not been for the ouster of Mumbai Indians and Kings XI Punjab, RR would not be turning up on Wednesday.

All that, however, holds little importance in knock-out matches, and RR would want to believe that they belong here. Eden Gardens is expected to be full to capacity, and sizeable queues for tickets were witnessed on Tuesday despite rains. Clearly, the visitors will have to hold their nerve in front of the 66,000-odd partisan crowd.

KKR had won the toss in both their league games against RR, and the trend is likely to continue on Wednesday. The teams couldn’t practice on match-eve, thanks to persistent showers in the evening. Regional Meteorological Centre forecasts cloudy skies and sporadic spells of rain today, and the team winning the toss will fancy their chances batting second. The stage is set for the prizefight.