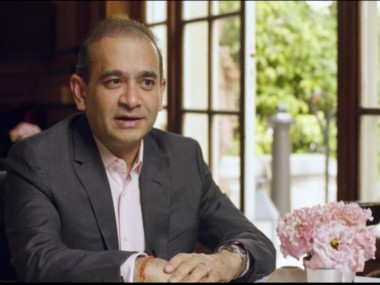 New Delhi: The Interpol has issue a red corner notice (RCN) against fugitive diamantaire Nirav Modi. A Red Corner Notice issued by Interpol urges its member countries to detain or arrest an accused, who is wanted in a country. The international agency was satisfied with the documents provided by the Central Bureau of Investigation (CBI) which is probing the $2 billion scam, sources said, PTI had reported earlier.

According to ANI, the Interpol has issued a RCN against Modi's brother Nishal Modi and his company's executive Subhash Parab.

The records the CBI provided to the Interpol included the non-bailable warrants issued by a Mumbai special court and the details of the charge sheets filed in the case, etc. The documents were found in order and satisfactory to the Lyon-based international police cooperation agency which is “processing” the CBI’s request, sources said, to PTI.

The CBI had tried to track the movements of Modi through a diffusion notice issued through the Interpol on 15 February, but it had limited success as only the UK responded to the CBI request, they said.

Modi managed to travel across several countries even after information about his passport being revoked by the Indian government was flashed in the Interpol central database on 24 February, the CBI had earlier said.

“After the passport was revoked/ cancelled by the External Affairs Ministry, we had updated this information in the diffusion notice. The information that Nirav Modi’s has been revoked was provided in the Interpol central database, available to all the member countries, on 24 February,” CBI spokesperson Abhishek Dayal had said.

He said after the ‘diffusion’ notice was issued by the Interpol on the request of the CBI, the agency followed it up with six countries where Modi was suspected to have fled.

The agency requested these countries to share information about his whereabouts and movements.

The agency sent these reminders to the Interpol coordination agency of the UK on 25 April, 22 May, 24 May and 28 May. Similar reminders were also sent to the agencies of the US, Singapore, Belgium, the UAE and France, they said.

The case pertains to cheating state-run Punjab National Bank through the fraudulent issuance of Letters of Undertaking and Foreign Letters of Credit worth over $2 billion (about Rs 13,000 crore) by Modi and his uncle Mehul Choksi, both absconding since the first week of January.