India vs England 2018: Bad back will be proverbial last straw

India vs England 2018: Bad back will be proverbial last straw 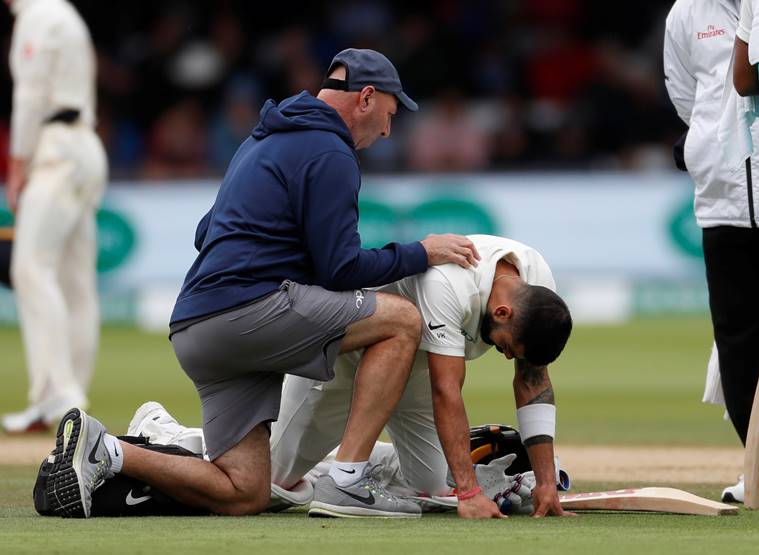 What’s Virat Kohli without his manic intensity? We shall find out in the next Test.

What’s Virat Kohli without his manic intensity? We shall find out in the next Test. The back problem that had him lying prostrate on the ground, writhing in pain and popping in tablets, will leave him with less intensity, if he is fit enough to play at Nottingham in five days’ time.

“I should be ready for the next game although not (with) the same intensity in the field. But I should be good enough to hold a position in the field and be 100% with the bat,” he said at the end of the second Test. “Again, I will have to look at the running bit of things which was difficult today. As of now, it is sore. I am not hiding that fact, but that is part of the game. I had to do what I could do to go there and bat again and try my best.”

Here are a few troubling questions: Can Kohli really field without the natural intensity kicking in, leading to more back troubles? Can he really control his urges so well? Can he win the battle against himself? What if that leads to more serious problems?

It used to be Sachin Tendulkar’s elbow that a cricketing nation fretted about for years. Now they have another part of the anatomy to worry about: Kohli’s back.

Kohli was forthright with the issue. “Back is one thing that can be very tricky when it goes off. It happened during the latter half of the last leg of the South Africa tour when I missed a T20 game because that was very sudden. It happened one day before. As of yesterday and today, it was not great. The good thing is I have five days before the next Test.”

It doesn’t sound good, nor did it look good. Even as the Test ended, he limped across the length of the ground to come to the press conference which is at other end of the arena. He stuttered ever so slowly, was stopped for a chat by Harbhajan Singh, who sent Kohli off with a friendly pat on the back.

Metaphor for India’s travails
At one point while batting, he couldn’t continue and had to lie on the ground, fully stretched in agony. As a metaphor for India’s surrender, it was apt but his injury lends a graver shadow on the immediate future.

He threw a reference to South Africa where the back had given way in January. It had come in a T20 game where he had limped off the field. He would then say: “I tweaked my glute a little bit. Thankfully, it’s not my hamstring. You know how I am, I had to bend bit more quickly. Then I felt a little bit more stiffness in my glute and that is why I went off. Not to be stupid and tear a muscle, I decided to go off and get it checked,” added Kohli.

In May, he had to pull out of the intended stint with Surrey which had kicked up more fuss. It was initially reported as a slipped disc but the cricket board said it was a neck sprain caused by fatigue and workload. One board official even pointed out a fitness video that Kohli had posted in response to the sports minister’s ‘fitness challenge’ that had apparently been shot on the day reports emerged of a more serious back injury.

The back problem has resurfaced at a most inopportune time for India. There is never a good time of course, but for it to kick in England when no other specialist batsman has looked remotely good must be a migraine-inducing problem for the team management.