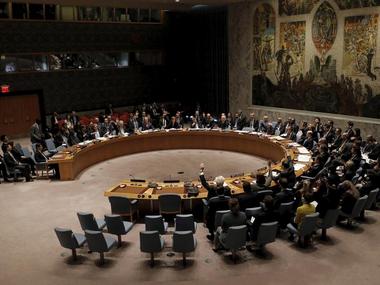 United Nations: The UN Security Council is poised to back a US proposal aimed at removing some of the hurdles that tough sanctions on North Korea have thrown up in the way of delivering humanitarian aid, according to documents obtained by AFP.

North Korea's humanitarian crisis has left about 10 million people — nearly half of the population — undernourished, according to UN officials, who have reported a drop in food production last year.

A US proposal put forward last month would provide clear instructions to aid organisations and governments to apply for UN sanctions exemptions for North Korea, according to the text seen by AFP.UN resolutions specify that sanctions should not affect humanitarian aid but relief organisations argue that strict trade and banking measures are creating bureaucratic obstacles and slowing down the flow of vital supplies.

After weeks of negotiations, the UN sanctions committee is expected to give final approval to the new guidelines on Monday. Once approved, a notice will be sent to the UN's 193 member-states by the committee "to provide a clear explanation of its comprehensive humanitarian exemption mechanism" which will "improve the delivery of humanitarian assistance to Democratic People's Republic of Korea (DPRK)," according to the documents.

The move comes as the United States is calling for maximum pressure to be maintained against North Korea to compel Kim Jong-un to follow through on his pledge to denuclearize the Korean peninsula.

After Russia and China urged the council to ease sanctions, US Ambassador Nikki Haley said the United Nations should not do "one thing" until North Korea takes action to dismantle its nuclear and missile programs.

A US official said the guidelines would ensure that "only critical, life-saving humanitarian activities needed in North Korea can continue" and that requests for exemptions will undergo a detailed review. "The United States has been very clear that we will continue to enforce the current sanctions until we achieve the final, fully verified, denuclearization of North Korea," said the official, speaking on background.

Those sanctions ban North Korea's exports of raw commodities while severely restricting imports of a range of goods and supplies of oil — vital for the country's military.

The measures have had a chilling effect, with UN agencies and aid organisations struggling to find partners willing to deal with the bureaucratic red tape from the tight sanctions regime on North Korea. "Economic sanctions are not supposed to have an impact on impartial humanitarian action. But they do. They have unintended consequences," said Simon Schorno, the head of aid operations for the International Red Cross in Asia. "We haven't seen the guidelines yet but we have been promised that they will speed up procedures, exemptions, and generally make processes run smoother. We're hopeful that the guidelines will make carrying out our work easier," he said.

At a UN meeting last month, North Korean Deputy Ambassador Kim in Ryong complained that deliveries of medical equipment such as X-ray machines, anti-malaria insecticides and reproductive health kits had been held up for months.

Kim said humanitarian aid was being "politicised" and argued that denying assistance to North Koreans in need was a violation of human rights. The United Nations is also facing a major funding shortfall for its aid operations in North Korea.

An appeal for USD 111 million in funding for food, medicine and other basic needs for six million North Koreans has so far raised only USD 12 million — 10.9 per cent of the total amount needed.
Only four countries have come forward with donations: Switzerland, Sweden, Canada and France.