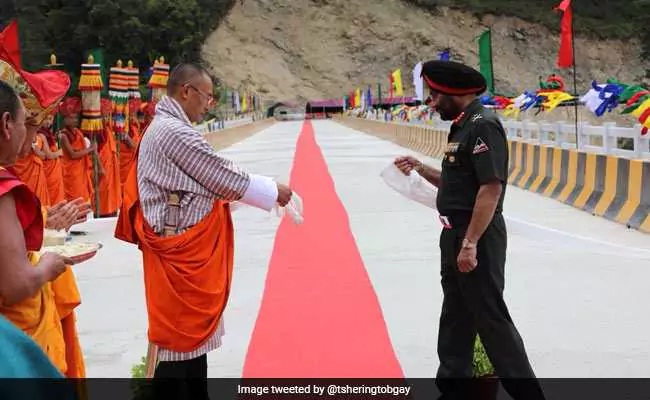 NEW DELHI: India's Border Roads Organisation has completed construction of a strategically key road in Bhutan, linking the neighbouring country's border town of Phuentshogling with its capital city of Thimphu.
The nearly 30-km long Damchu-Chukha road, which crisscrosses rugged and difficult terrain, has been constructed at a cost of Rs. 287 crore under India-assisted development projects in the Himalayan nation, military officials said.

Several India-funded infrastructure projects, including in the power sector, are being implemented in Bhutan, in sync with close bilateral relationship between the two countries.

"Let this road be a reminder to celebrate our friendship. Let's showcase the world how beautiful the relationship between Bhutan and India is," Bhutan's Prime Minister Tshering Tobgay said after inaugurating the road last week, according to a senior military official.

Bhutan is a strategically important country for India due to its location, and both sides have been ramping up overall cooperation, including in areas of defence and security, over the past a few years.

During the Doklam standoff between the troops of India and China last year, Bhutan had extended support to New Delhi.

Mr Tobgay had visited India earlier this month during which both the countries resolved to take the "exemplary" bilateral partnership between to "new heights".

The new road is expected to reduce the travel time between Southern Bhutanese city of Phuntsholing to Thimphu by one hour and reduce the journey by around 19.5 km of steep uphill driving, the official said.

He said the road was laid after removing over 2,500 meters of hard rock and it crisscrossed difficult terrains which did not have any access.

"These challenges demanded innovative efforts for construction to keep pace. Cutting the last 900 metres of hard rock stretch and benching it down to 106 metres at Chukha was the most challenging aspect," the official said.

Another official said the road is of strategic importance for Bhutan.
The road has been constructed by Dantak, which is part of the BRO. Dantak has been working in Bhutan since 1961.