Imran Khan takes oath in Pakistan's parliament as MP, local media hails 'the only option' but warns him of challenges ahead

Imran Khan takes oath in Pakistan's parliament as MP, local media hails 'the only option' but warns him of challenges ahead 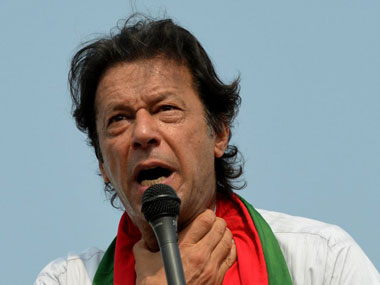 As Imran Khan and his council of ministers took oath on Monday for Pakistan's 15th Assembly, discussions on his blessings and challenges ahead began again. The newly-elected 324 members of the National Assembly took oath as the lawmakers for the third consecutive parliament of Pakistan but the prime minister-in-waiting took away all the limelight due to the anticipation ahead of his swearing-in on 18 August.

Almeida says that "Imran has a formidable public relations (PR) machinery available with him, partly built up by his party and partly loaned out to him by supportive elements." And thus, "all Imran has to do is stay a smidgen ahead of the previous lot in terms of delivery, keep his PR machine amped up to maximum, and ride the crest of popular support to remaining a legitimate contender in the next election."Dazn's Cyril Almeida captures Imran's rise with the three factors which led to his win— "serious-minded political opposition together with specific demands on top of public disapproval of political inertia and the court’s activism" — is what he describes to have worked in Imran's favour giving him the required positive political momentum. "He hasn’t quite burned down the house yet, but he has set a couple of the rooms on fire and embarked on a project wracked by uncertainty," Almeida writes.

Almeida emphasises the fact that Pakistan was has reeled under "horrible governments" in the past, which left Imran with the ultimate get-into-the-PM Office excuse: scepticism. He goes on to focus on the general perception which surrounded Khan prior to the elections, "What’s the worst he can do? Why not give him a chance? It’s not like the others have worked." "But sceptical is dangerous, he writes, as "between the dead option of dreamy and the extant option of scepticism, you have to wish for hard-nosed reality".

Meanwhile, The Express Tribune's Kamran Yousaf recollects that how in one of his TV interviews, Khan was asked what trait and quality saw him through in his cricketing career and his reply was: “The passion to succeed, the ability to take the knocks, the ability to pick myself up. I always believe that I could win and any chance you saw in winning I would try and grab it. I never give up till the end.” According to Yousaf, "for the next five years or as long as he stays at the helm, Khan's passion to succeed, ability to take the knocks and the spirit of not giving up would surely be tested as after all leading a nation is a different ball game" altogether.

However, The News International's Syed Talat Hussain opines that even though "there is much focus on the situational curses (challenges) facing the prime-minister-in-waiting, but not enough has been said on his blessings (opportunities)."

"The speed with which almost all independents joined the PTI in Punjab – and some even at the Centre – is indicative of the trends of the times", Hussain says. He writes that "the ‘seasoned seasonals’ of Pakistani politics understand that for a considerable length of time Imran Khan is the way to go in the country’s national politics. And this means that he will not have the usual disadvantages associated with running a partner-dependent coalition government and will be pretty much free to take his own decisions."

Reflecting on the weak Opposition Khan is faced with, Hussain says that "What cements the bond between Imran Khan’s government and the generally-unreliable coalition partners is the state of affairs of the mainstream opposition." "Imran Khan will have no big issues inside the house when it comes to dealing with the opposition. Yes, there will be noise. Yes, there will be fury. Yes, there will be waving of fists and walk-outs and all that, but under the command of Shahbaz Sharif there will not be an opposition that can stymie a government. This is a great blessing for a government that requires a free path to fulfil its promises and doesn’t want to be tied down by prolonged uproars both in and outside the house," he remarks.

Hussain says that among his other blessings, Khan is also blessed by the rising expectations and support that he has from outside the realm of elected houses. Like his party’s vote bank has doubled, the country is exhausted by five years of political turmoil and that there is a considerably large number of Pakistanis who want to see sanity prevail.

"The international community, particularly investors and those with high stakes in Pakistan, want a strong, front-led government that is capable of taking tough decisions. And because he is starting his first stint, Khan’s government does not carry the taints and controversies of the past and he can carve a new toehold for the country in many capitals of the world," Hussain points out.

"No civilian politician has ever got more than what Imran Khan has received. He now needs to double down on the plan to deliver the goods he promised before the blessings run out and old curses take hold", concludes Hussain to aptly put the huge burden of expectations Khan carries as he starts this new inning.