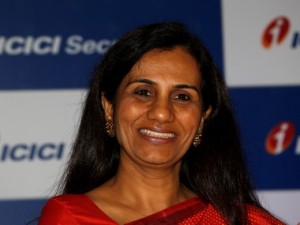 Has Chanda Kochhar, the Chief Executive Officer and Managing Director of private sector lender, ICICI Bank been asked to go on independent leave pending independent enquiry? According to a report in the Mint, Kochhar has been asked to go on leave pending an independent enquiry to probe "conflict of interest" allegations against her regarding loans extended to Videocon Group. The information was divulged to Mint newspaper by a person with direct knowledge of the Board’s decision. The report said, the decision was taken based on the advice of a majority of the seven independent directors on the board.

On Wednesday, ICICI Bank's Board of Directors had decided to institute a "comprehensive enquiry" to look into an anonymous whistle blower's complaint alleging that  Chanda Kochhar had not adhered to provisions relating to "code of conduct" of the bank. The Mint said, the enquiry may be headed by a retired judge of the Supreme Court. It will begin next week and will be completed in two months, the source told the newspaper.

In a regulatory filing on Wednesday, the bank said: "The Board of Directors, at its meeting held on 29 May, 2018 decided to institute an enquiry to be headed by an independent and credible person, to examine and enquire into an anonymous whistle blower complaint, disclosing certain information, alleging in substance that Bank's MD and CEO had not adhered to provisions relating to "Code of Conduct" of the bank and legal and regulatory provisions relating to "conflict of interest" over a period of time, as also alleging quid pro quo in the course of her work in dealing with certain customers/borrowers of the Bank."

The bank said the scope of enquiry would be comprehensive and include all relevant matters arising out of and in the course of examination of the facts and wherever warranted, "use of forensic/email reviews and recordal of statement of relevant personnel, etc."

The enquiry would also cover all connected matters in the course of the investigation to bring the matter to a final close.

"In keeping with the Whistle Blower Policy of the bank, Board has mandated its audit committee to take all further actions in the matter to operationalise this decision -- including in particular, appointment if an independent and credible person as Head of the Enquiry, determining the terms of reference of the Enquiry, the period which will be covered by the Enquiry," the bank said.

"The Audit Committee will also, in consultation with the Head of the Enquiry, make arrangements to assist him with independent legal and other professional support as may be required," the bank added.