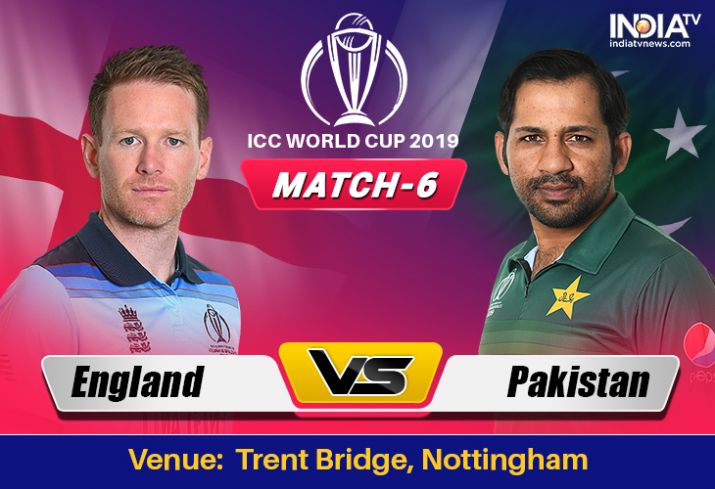 The prediction is for England to win the match.

There is no forecast of rain in the morning. But from 2 PM onwards to 4 PM in the afternoon, the heavens may open up. From 1 pm onwards, a significant amount of clouds will be there. The temperature will be hovering around the 18 degrees Celsius. The humidity will be in the 40s and 50s.

The pitch at Trent Bridge is said to be amongst the most run-laden in the world cricket right now, there could be a high score here if one of these teams fires with the bat. As per reports, the strip dished out for the world-record 481 match last year between England and Australia will be used tomorrow. Hence, a run-fest seems to be on the cards, unlike last time when the fast bowlers dominated. In that case, teams may opt to bat first and defend whatever they score.

England team is in form and they will be eyeing another big win in the match to go on top of the points table. England proved why they are called one of the favourites for the title as they thrashed South Africa by 104 runs in the opening match of the World Cup at the Oval. There is also some good news for England as pacer Mark Wood is expected to return to the playing 11 against Pakistan after recovering from injury. Weather and crowd are in favour of England. Jason Roy, Joe Root, Eoin Morgan and Ben Stokes looked in good touch last time around.

In fact, Stokes looked at his best with the leather as well as in the outfield where he took a thunderous catch to send back Andile Phehlukwayo. Jofra Archer’s inclusion hasn’t backfired as well. Jos Buttler floundered the other day, but the world’s aware of the damage he can do on his day.

Pakistan have been going through some really tough times. They are on a woeful 11-game losing streak and started their World Cup campaign on the worst possible note. Pakistan will be eager to leave their disastrous defeat to West Indies behind. Asif Ali didn’t play the last game and he may get a chance in place of Haris Sohail, who fell to Andre Russell’s ferocity last time at the same venue. Asif was in decent form in the England ODI series and is someone, who can inject momentum into the innings with his wide range of strokes.

Asif’s inclusion will also mean that Sarfaraz may promote himself to number four. Mohammad Amir picked up three wickets and his return to form would be a massive morale-booster for the Men in Green. The onus will be on the top three — Babar, Imam and Fakhar — to build the platform.

Some of the statistics between England & Pakistan

1.    In 87 head to head matches against each other in ODIs, England have an emphatic advantage as they have trumped Pakistan 53 times. Meanwhile, Pakistan have only won 31 times against England while three games have ended in a tie.

2.    England and Pakistan have faced other 9 times in the World Cup. Both the teams have a similar record as they have emerged victorious 4 times each while one match ended in a no result.

3.    England and Pakistan have played each other thrice in the World Cups held in the United Kingdom. The hosts have a perfect record as they have defeated Pakistan on all three occasions.

Our prediction was wrong. Pakistan win this match.