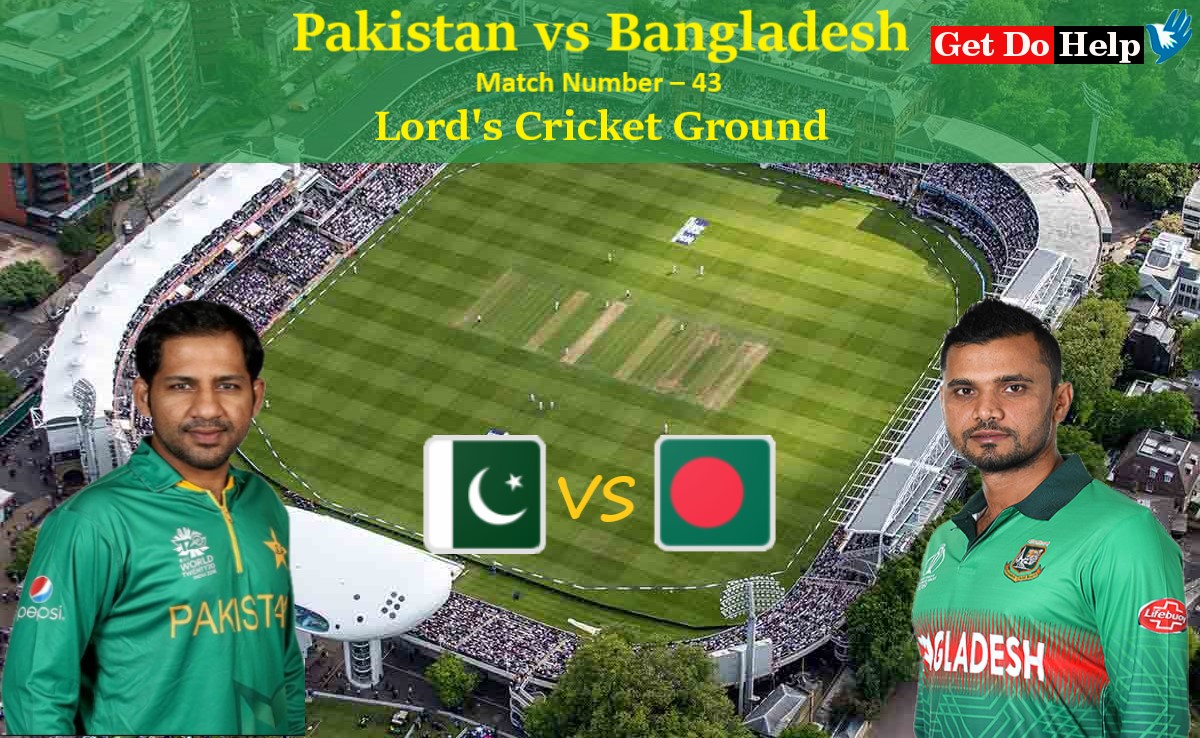 Cricket match between : Pakistan vs Bangladesh

Match Prediction : Pakistan expected to win this match...... To know more about our prediction and tips read below details

There are no chances of rain in todays’ game although there will be cloud but its harmless. The sun will also be shining brightly. The atmosphere won’t be cold with the temperature in between 21 degrees to 26 degrees celsius. The humidity will be in the 40s and 50s throughout the duration of the encounter.

The track at Lord’s has helped the team, batting first. The chasing sides haven’t found the going easy, having lost games by 49, 64 and 86 runs respectively. Hence, the numbers suggest that it won’t be a sensible move to bat second. The pitch is a bit on the slower side, and it has something for the pacers as well, as shown by the likes of Boult and Starc. An overly high-scoring affair may not be on the cards.

Pakistan is almost out of the tournament. They need 300+ victory to qualify in semi-final and if opponent team will choose bat first then there is no chances for Pakistan. Pakistan wants this victory just for their pride. After losing match against India, Pakistan team does not have much confidence. Pakistan will not want to change their winning combination. Fakhar Zaman and Imam-ul-Haq need to start good. Babar Azam is in excellent form, having notched 378 runs in seven games at an average of 63. Mohammad Hafeez also doing pretty well in the middle order. After a couple of impressive half-centuries, Haris Sohail failed in the last game and he’ll be keen to make amends. Imad Wasim and Sarfaraz also shows their talent. In the bowling department, Mohammad Amir and Wahab Riaz have been exceptional. But in the last few contests, even Shaheen Shah Afridi has given his team breakthroughs. Leg-spinner Shadab Khan has been reasonable.

Bangladesh also out of the tournament but this time Bangladeshi team fights very well. The Tigers may bring in Mahmudullah as now he is fit. Sabbir Rahman is likely to make way for Riyad. Rubel Hossain is not in his form and he may be replaced by Mehidy Hasan, who can be tough to score off on a slow deck. Soumya Sarkar has shown a lot of promise and experienced Tamim Iqbal hasn’t been at his very best either. Shakib Al Hasan’s numbers speak for themselves and he has been exceptional. Mushfiqur Rahim has shouldered the responsibility in the middle order pretty efficiently. Bangladesh will wish for a bit of consistency from Liton Das. Mohammad Saifuddin, scoring a fifty in the previous game, was a big positive for the team. Mustafizur has been their standout performer. Mashrafe would want to make his last World Cup game memorable.