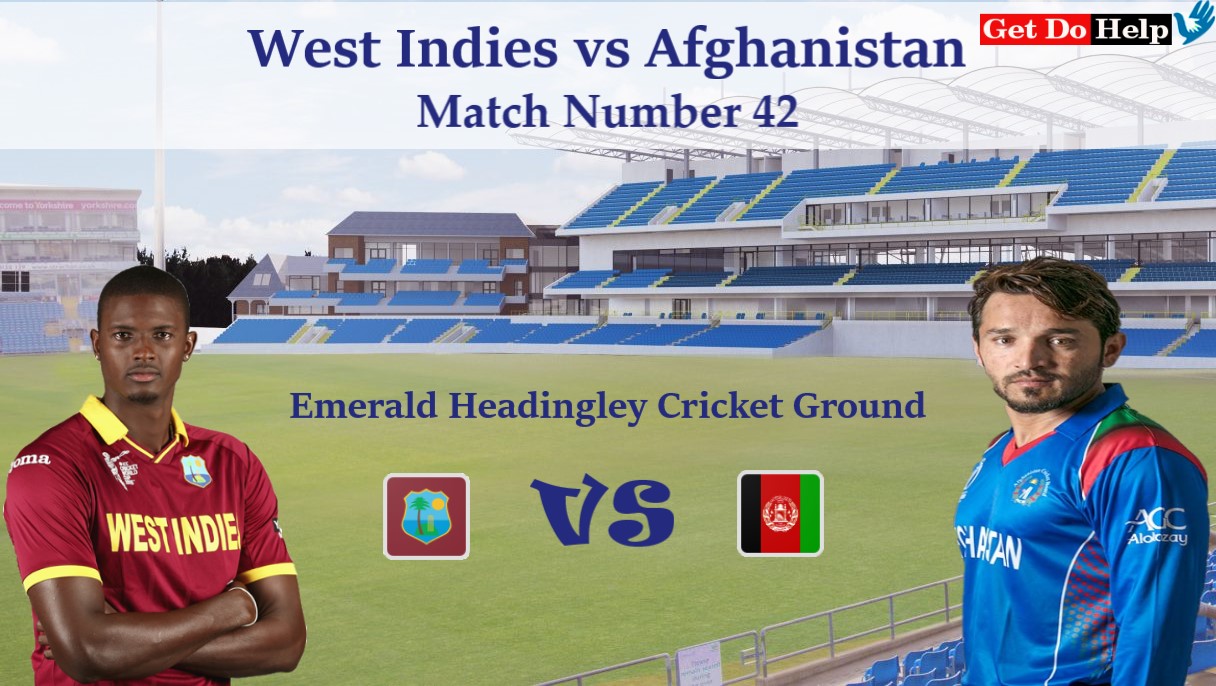 Match Prediction : West Indies expected to win this match...... To know more about our prediction and tips read below details.

There is no chance of rain today in Leeds. Clouds will be there but won’t be rain. The atmosphere will be cool with the temperature between 18 and 21 degrees Celsius. The humidity will be in the 60s at the start and will come down to the 40s by the end of the encounter.

Two matches in Leeds have been played thus far in the World Cup and both times, the team, the batting second had to play out of its skins. If the same track is used, then a high-scoring affair may not be on the cards. The spinners are most likely to play a massive part on a slow and low strip. Toss winning team should look to bat first and put pressure on the opposition with spin-attack.

Afghanistan stands in last position in points table but they have given tough challenge in their last two matches against India and Pakistan. Hamid Hasan has already retired after suffering a hamstring injury. Sayed Shirzad and Dawlat Zadran is likely to make the cut. Shirzad came in as Aftab Alam’s replacement before the last game. Rahmat Shah and Gulbadin Naib will keep on opening with the reliable Hashmatullah Shahidi at number three. Ikram Ali Khil looked solid after being promoted high up the order. The middle-order has both experience and power with the likes of Asghar Afghan, Mohammad Nabi, Najibullah Zadran and Samiullah Shinwari in their ranks. In the bowling department, Rashid Khan and Mujeeb Ur Rahman will hold the key on a spin-friendly track. Nabi’s role as the bowler will be important. As a skipper, Naib will need to a bit more judicious regarding decision making.

Although the Caribbean team is already out from the race but they will play only pride to play for. Kemar Roach may be come back and will replace Shannon Gabriel. Speedster Oshane Thomas is terribly out of form as well. Sheldon Cottrell has been outstanding throughout with 12 wickets. Left-arm spinner Fabian Allen can be tough to face on a slow strip. The Windies batting has blown hot and cold, and needs to show a bit of maturity. Allen, Braithwaite and Pooran have been excellent in the last few games. But the rest of batsman have floundered and the batting hasn’t come across as a unit. Most of them have been guilty of throwing their wickets through rash strokes. The experienced Chris Gayle and Shai Hope haven’t done anything of substance of late.