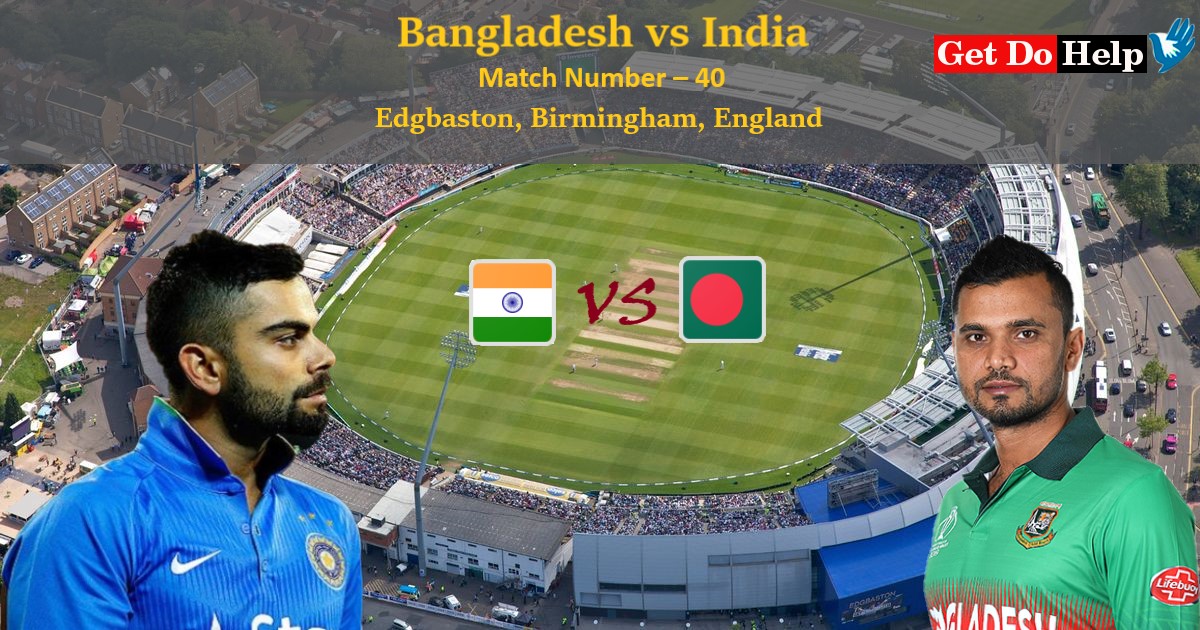 Cricket match between : Bangladesh vs India

Match Prediction : India expected to win this match...... To know more about our prediction and tips read below details

Birmingham weather is clear today. No chances of rain and the sun will be out throughout game time. Cloud will be there but not threatening by any means. The temperature will be in between the 17 and 21 degrees Celsius. The humidity will be in the 60s at the start and will gradually come down to the 40s by the close of play.

The pitch is unpredictable as in previous one of the match, pitch was spin friendly but in another match, the spinners were taken to the cleaners and the batsmen weaved their magic. It could be high scoring match as pitch looks very flat now. Toss winning team will choose to bat first so that they can make maximum runs.

After England’s victory over India at the Edgbaston, the road ahead for Bangladesh in the 2019 World Cup has become tougher. However, a lot of calculations need to go in their favour in order for them to qualify for the semis. And they know that now they will fight against one of the tough team so they do not want to take any risk. Bangladesh will most likely to play with their eleven from the last game. Soumya Sarkar and  Liton Das couldn’t deliver in their last match. Tamim Iqbal is doing well, Shakib Al Hasan is in prime form, but the Tigers can’t put too much pressure on him.

Mushfiqur Rahim has silently done his job, getting 327 runs at  65.40. Mahmudullah is also playing good. Their bowling has tended to crumble when up against quality batting lineups. All the three pacers- Mustafizur, Mashrafe and Saifuddin- have leaked runs at an economy of over six. Moreover, the Tigers haven’t been able to pick up wickets in the powerplay and that’s a major area of concern.

India stands in number 2nd but they need one more victory to qualify in semi-final. So they have to take all matches very seriously. Although Bangladesh in on number 7th but take them lightly might be a big mistake for India. India will not change their eleven. KL Rahul has to take some charge, Rohit Sharma came back to form after a couple of failures. Virat Kohli is amongst the runs but now would dearly wish to get a century after five consecutive 50 plus scores. Meanwhile, Vijay Shankar has been ruled out owing to a toe injury. It means that Rishabh Pant is likely to be persisted with, provided the management doesn’t think about bringing in Dinesh Karthik. MS Dhoni needs to up his game at the earliest. The onus will also be on Kedar Jadhav to show consistency. In the bowling lineup, Shami has been exceptional with 13 wickets. Bumrah has been immaculate as well. Chahal and Kuldeep will be keen to make amends after a poor outing.