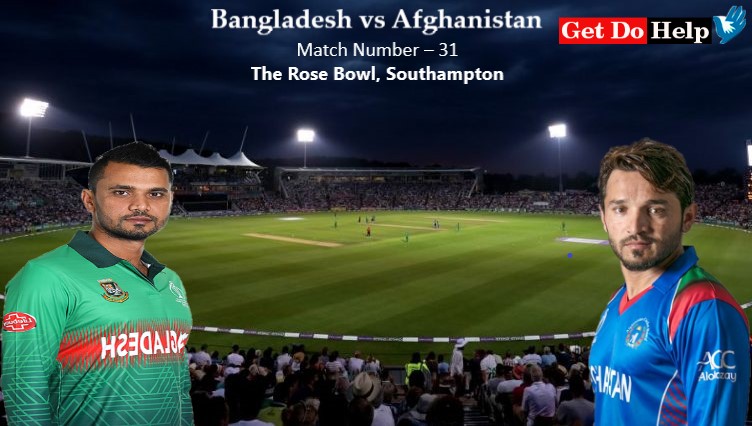 Cricket match between : Bangladesh vs Afghanistan

Match Prediction : Bangladesh expected to win this match...... To know more about our prediction and tips read below details.

The weather of The Rose Bowl, Southampton is very good today, very less chances of rain. There will be cloud but rain would not be there. A couple of rain interruptions can be expected. The temperature will be around 19 degrees Celsius. The humidity will be on the high side with the numbers in the 70s and 80s.

The pitch in Southampton looks slow as we have seen in last match between India and Afghanistan. It was low score match but pitch may be help to spinners. But under gloomy weather and with rain around, the spinners may not get as much assistance. In all the games at this venue, the strip got better in the second half. Therefore, teams may opt to field first after winning the toss.

Bangladesh stands in number 6 in point table and there is a hope for them so they will try hard and do not want to take any chance in their next matches. Bangladesh Team are likely to bring back Mosaddek Hossain, who missed the last match due to an injury. Sabbir Rahman got a golden duck versus the Aussies and he may have to sit out. Tamim Iqbal got a couple of decent knocks under his belt and that should keep him in good stead. Soumya Sarkar needs to be a bit more consistent. All of Mahmudullah, Shakib Al Hasan and Mushfiqur Rahim are averaging above 50 with the bat and they’ll need to be on top of their game. Mashrafe’s form with the ball may not be that great, but he still remains an inspirational figure.

Having lost all their six matches of the 2019 World Cup, Afghanistan team is already out in race of semi- final and stands in last position but their moral will be high after lost match against India as it was very tough victory of India.

The Afghans will not change in their team, they will play with the same combination. In the batting department, Rahmat Shah and Hashmatullah Shahidi are in a good form and made some useful runs. Gulbadin Naib will promote himself. The Afghan skipper is also their leading wicket-taker with seven scalps. Hazratullah Zazai needs some more efforts to take wickets.

Mohammad Nabi has shown the damage in last match against India, keeping a calm head. Najibullah Zadran has also put forth his prowess lower down the order. Rashid Khan also came back to form versus India after getting hammered by Eoin Morgan’s England. He’ll share the spin department along with Mujeeb Ur Rahman and Shah. Fast bowler Dawlat Zadran and Aftab Alam will also have their roles to play.