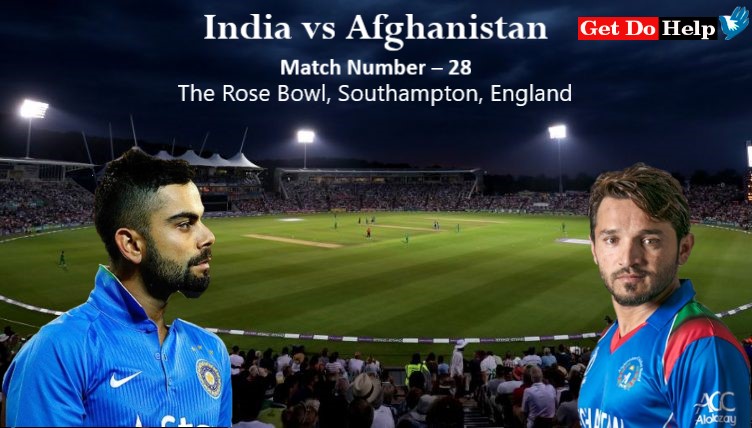 Cricket match between : India vs Afghanistan

Match Prediction : India to win this match...... To know more about our prediction and tips read below details.

Good news for all of us and as well as for teams also as there is no forecast for rain. Clouds will be there but it won’t rain. Hopefully we can see the sunny sun shine. The temperature will be in between 17 and 19 degrees Celsius. The humidity won’t be high with the numbers in the 50s.

The Rose Bowl, Southampton pitch has been a decent one for batsman but the pitch will help in pace and bounce to the pacers and hence, making inroads with the new leather becomes that much more important. Toss winning team will choose field first as the strip gets batting-friendly.

India stands on number 3 and almost qualified for semi-final. Team is looking very strong in all department and after beating Pakistan, India’s moral is very high.

India is likely to bring in Mohammed Shami for Bhuvneshwar Kumar. KL Rahul started very well against Pakistan, skipper Kohli and Rohit Sharma are also amongst the runs. Hardik Pandya can again be promoted if the Men in Blue get off to a flier. MS Dhoni and Kedar Jadhav will also in a good form. Vijay Shankar got hit on the toe during his practice but he is expected to be fit. Kuldeep Yadav got his rhythm. Jasprit Bumrah has been picking up wickets as well.

The Afghan stands in last position. The Afghans may bring in Hazratullah Zazai, who didn’t play the last game. Skipper Gulbadin promoted himself up the order and it worked well for him as he scored 37 off 28. He got got three wickets also. After a few failures, Rahmat Shah got amongst the runs. Hashmatullah Shahidi has been Afghans’ best batsman, having scored 165 with a couple of half-centuries. Mujeeb Ur Rahman didn’t pick up a wicket versus the Brits, but his accuracy didn’t allow the batters to get away. Rashid Khan would be keen to park outside the disappointment of the last game and come out all guns blazing.