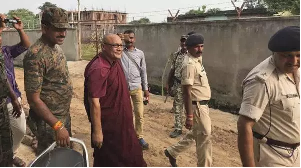 A case has been registered by Gaya Police on charges under the Protection of Children from Sexual Offences (POCSO) Act and various IPC sections agains the man whose NGO ran the facility — another monk identified as Sanghapriye alias Sujoy Bhante, 49.

Nine days ago, a Buddhist monk visiting the Mahabodhi temple in Gaya dropped in at a school and meditation centre nearby to check on the ten boys from Assam he had helped get admission there. What followed next stunned the monk — and went on to blow the lid off a chilling tale of alleged sexual abuse and exploitation.

“Humein yahan se nikalo (Take us out from here),” an eight-year-old boy told the monk.

Today, all 32 boys at the school, most of them Chakmas from Assam and Tripura, have undergone medical tests. A case has been registered by Gaya Police on charges under the Protection of Children from Sexual Offences (POCSO) Act and various IPC sections against the man whose NGO ran the facility — another monk identified as Sanghapriye alias Sujoy Bhante, 49.

On Thursday, the accused was remanded in judicial custody for 14 days. On Friday, the 8-yr-old told visiting monk: ‘Humein yahan se nikalo’ district administration set up a three-member committee to investigate the NGO, which was registered as a trust on February 13, 2018.

For the Bihar government, the case couldn’t have come at a worse time. This month, it suspended 23 officials and staffers of child protection units on charges of “negligence” in the Muzaffarpur shelter home abuse case that reached the Supreme Court.

In Gaya, the FIR registered on August 29 states: “Several of these children narrated how they would be made to go naked and how ‘galat kaam’ (wrong act) would be done to them.” It records the age group of the boys as eight to 16 years, and states that they were “not allowed” to go home even once after first coming here 18 months ago. Police are awaiting the medical test results.

“When I visited that day, the boys didn’t say anything further, probably because some caretakers of the school were within earshot,” says Sadhnanand Bhante, the visiting monk from Tripura who blew the whistle on this case. “But I saw blisters on the faces and heads of some of them. Apart from that eight-year-old boy, several children came up, requesting me to take them away. But even then, I could not sense what had really gone wrong,” says Sadhnanand, who has been based in Mumbai for the last 20 years.

“When I met them again at the Mahabodhi temple, they repeated their request,” he says. And that was when Sadhnanand decided to sound the alarm. “I called up the headman of the village in Assam who had moved these 10 children, including his two sons, from various villages in Karbi Anglong to this school,” he says.

For Sadhnanand, it’s a mix of shock and guilt. “I had introduced Sanghapriye to the village headman,” he says.

“About two years ago, Sanghapriye took me to his new centre. I saw 12 boys there and was impressed by the arrangements and cleanliness. Sanghapriye then expressed his desire to help poor children from Assam. I promptly called up the headman whom I had known for years. He sent 10 children, including his two sons,” says Sadhnanand, adding that when he visited Gaya about a year ago, “the boys looked comfortable”.

On August 28, the parents of five of the children, including the village chief, met Sanghapriye in Gaya, saying they wanted to take their children away. The next day, police registered the FIR based on a complaint from the village chief.

The case has now left monks at the Mahabodhi temple rattled. “We would often see children from Sanghapriye’s school at the temple. I did notice scars on the faces of some of them during recent visits,” says a monk.

“The students were often accompanied by caretakers, so they would seldom open up. Sanghapriye had been living regularly here for about three years. Not much is known about him,” says another monk.

Says a resident of the village where the school is based: “The land where the three-storey building came up about two years ago belongs to a man from an adjoining village.”

According to district officials, Sanghapriye’s trust is registered with the Bihar government and states that it is “working for socio-economic, educational and cultural” development of the underprivileged.

“Sanghapriye, who claimed to be a permanent resident of Howrah, got his Aadhaarcard from Bhagalpur village of Bodhgaya this February,” says an official.

Gaya Town DySP Raj Kumar Shah says the statements of all 32 children are likely to be recorded under section 164 of CrPC. “We have come to know that some of the boys were also taken to Kolkata. Police are now investigating if this case involves a sex racket,” says Gaya City SP Anil Kumar.