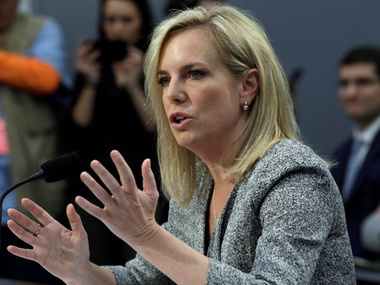 The Donald Trump government in a court filing dated 20 August has confirmed, yet again, that the proposed rule to revoke work permits of H1B spouses - popularly called H4 EAD - is currently in "final clearance and review" process and seniormost officers of the Department of Homeland Security (DHS) are working out the fine print of the terms of approval. lmmigration, border security and visas are front and center of Trump's midterm election campaign blitz and H4 visa holders who spoke with Firstpost are concerned that the risk of H4 EAD being killed off rises as the election date closes in.

This is the operative part of the 3 page 'status report' filed by the DHS: "Final DHS clearance review of the proposed rule is ongoing, and senior levels of the Department’s leadership are actively considering the terms of the NPRM for approval. As previously noted, after DHS clearance, Office of Management and Budget review will occur under Executive Order 12,866, Regulatory and Planning Review. As represented to the Court in prior status reports, DHS’s intention to proceed with publication of an NPRM concerning the H-4 visa rule at issue in this case remains unchanged."

The latest court filing has been made in an ongoing lawsuit Save Jobs USA versus Department of Homeland Security (DHS) which has challenged the H4 EAD almost from the day it came into being back in 2015. The petitioners have pushed harder after the new US government came to power. There are two approaches to view the 20 August filing. One way is to say the needle hasn't moved and this is exactly the same position the DHS took in April and May - that the clearance and review process is on. On the other side, every time the H4 EAD is mentioned in public records, it sends anxiety levels across the H4 community soaring.Work permits for spouses of H1B workers go by 'H4 EAD' - short for H4 employment authorization document.

H4 EAD is an Obama era regulation which opened the floodgates for H4 dependents of H1B workers to get work authorizations continues to hang by a thread. In the 27 years that the H4 visa has existed, it’s only in summer of 2015 that a certain subset of H4 visa holders (whose H1B spouses had applied for green cards) were allowed permission to pursue paid work in the US. For everybody else on an H4 visa before 2015, paid work was out of question.

Note that the H4 EAD was born of a rule making process and it is not hard coded via legislation, unlike the H1B. It's far easier for the bureaucracy to implement a slash and burn strategy with 'rules' which don't need Congress approval. What this means is that if the proposed rule is published, there's typically a 60 day comment period for the public to weigh in before the next steps.

The latest court filing also confirms that the plan to revoke the H4EAD has not reached the Office of Management and Budget. For H4 visa holders who are following every turn in this slow skewering process that has unravelled after the 2016 elections, the optimists continue to bank on the fact that there's no deadline that's mentioned and the file hasn't moved beyond the doors of the DHS yet. This is what the DHS has said in its Spring Agenda earlier this year: "On February 25, 2015, DHS published a final rule extending eligibility for employment authorization to certain H-4 dependent spouses of H-1B nonimmigrants who are seeking employment-based lawful permanent resident (LPR) status. DHS is publishing this notice of proposed rulemaking to amend that 2015 final rule. DHS is proposing to remove from its regulations certain H-4 spouses of H-1B nonimmigrants as a class of aliens eligible for employment authorization."