FIFA World Cup 2018: Germany have perfect blend of precision and balance but history is against Joachim Low's men

FIFA World Cup 2018: Germany have perfect blend of precision and balance but history is against Joachim Low's men 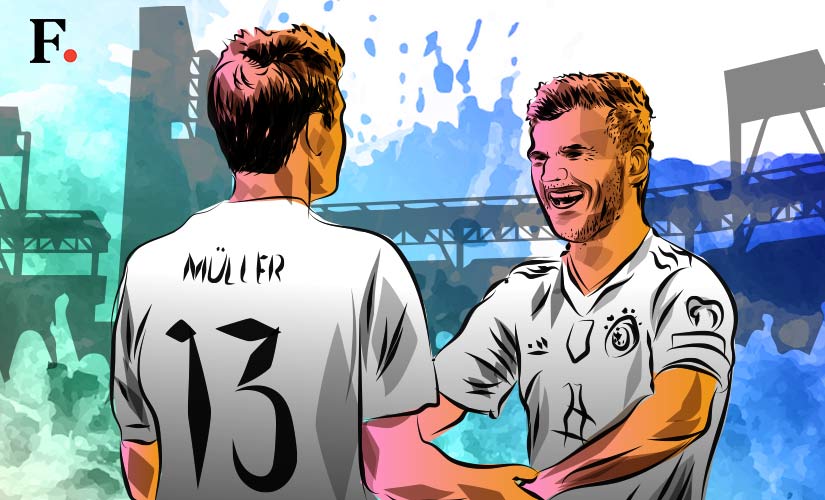 A cursory glance at Germany's squad for the 2018 FIFA World Cup suggests that the team has enough firepower to lift the 36 cm high trophy made of solid 18-carat gold on 15 July in Russia. Die Mannschaft are defending world champions, 2017 Confederations Cup winners and a team with ten wins out of ten in World Cup qualifiers.

However, when they take to field in Russia, Germany’s most difficult opponent might not be a certain Brazil, Spain or France. The reigning world champions have to prevail over history. No team has succeeded in defending their title at a World Cup since Pele’s Brazil defeated Czechoslovakia in the 1962 Final to repeat their 1958 triumph.

It’s been four years since their awe-inspiring triumph in Brazil and a lot has changed for the NationalMannschaft since the previous edition. Joachim Low’s men sport a new yet not-so-convincing look but ride on the same rudimentary education.

The Germans have named nine players from the 2014 title-winning campaign, but key contributors like captain Bastian Schweinsteiger, Philipp Lahm, forward Miroslav Klose — the top goalscorer in World Cup history — forwards Mario Gotze and Andre Schurrle, who famously came off the bench to combine on the only goal in the final against Argentina, are missing from the official 23-man squad.

But that doesn't stop them from taking a shot at World Cup glory, once again.

With Low, to Russia

There’s no hiding that Low loves his players, staff and the system. No player in the national team makes the squad if he doesn’t fit the team’s blueprint. The big names, run of form and even the accolades count for nothing when the coach has had a successful and effective setup in place.

Since becoming an assistant to old friend and then Germany coach Jurgen Klinsmann in 2004, the duo envisioned direct football with the primary focus on possession, something the Dutch would be proud of. For that, they quashed the old stoic German style of mechanical football.

However, after Klinsmann left in 2006 for a new challenge in the United States, the plan remained. Despite his departure, the rest of Germany was assured that the national team was in safe hands. Low’s free-flowing, easy-to-the-eye attacking football guided Germany to a runners-up position at 2008 Euro, a third-place finish at 2010 World Cup, semi-finals at 2012 Euro and trophy win in 2014 World Cup.

After remodeling the style, the players adhered to the quick and effective short-passing game. Albeit, a little more direct than Netherland’s Total Voetbal or Spain’s famed tiki-taka football.

The tactical changes came as a breath of fresh air, and so did Chancellor of Germany Angela Merkel's 'open door policy' in 2015. Germany’s decision to embrace a fresh multicultural identity with its new immigration policies attracted a lot of Turkish, Polish and African origin players. And it’s safe to say that the country has reaped the rewards.

There are only a few teams out there who are efficient and ruthless than Germany. Their commitment to their plans has been highlighted with the omission of talented players like Leroy Sane, Gotze, Emre Can and many others.

Low has a large reservoir of talent to choose from and he admires players who fit his system. One of them is midfielder Ilkay Gundogan. After two years, the midfield wizard of Turkish-descent has finally been able to play an entire season without fitness problems.

Gundogan's former Borussia Dortmund teammate Marco Reus befalls a similar fate. The winger made his Germany debut in the same year as Gundogan, 2011, and has only just reached 30 caps. Reus missed the 2014 World Cup after sustaining an injury on the eve of the main event – and couldn’t be called up for the European Championship on account of a groin injury.

Low now has two of his trusted players in Reus and Gundogan who have a point to prove at the grandest stage.

The omission of explosive attacker Sane, a Premier League champion with Manchester City and PFA Young Player of the year, causes rankle but makes sense, knowing Low wants his side to play a typical style of football.

Low’s sides play in phases – a basic 4-2-3-1 or 4-3-3 — and the 58-year-old tinkerman is not shy of introducing a new pattern with different players and fresh legs, obviously. Remember how substitutes Andre Schurlle and Gotze combined against Argentina in extra-time to win it for Nationalmannschaft?

There won’t be much of a difference this edition, as Low’s players know exactly what is expected of them.

Despite making just four appearances for Bayern Munich this season after a foot fracture prematurely ended his season in September, Manuel Neuer was picked as the first choice goalkeeper by Low and was announced as the captain of the side. A winner of the Golden Glove award in 2014, all eyes will be on the Bavarian custodian. The usual first-choice centre-back pairing of Mats Hummels and Jerome Boateng, bedrocks of Bayern Munich’s strong defensive unit, have cemented their place in the heart of Die Mannschaft’s defence. However, the addition of the lanky Nikolas Sule gives Low an extra option as the Bayern defender could prove pivotal against physical sides.

Over the years, German managers have had the pleasure of working with multi-talented wing-backs. Defenders with the ability to make storming runs through the flanks and who are equally strong in defence. A fine example would be former captain Lahm, who excelled in this role not only for his national side but also for Bayern. But it is safe to say that Low has the right-back position covered by Joshua Kimmich, who has unflinchingly taken over from Lahm.

On the other flank, left-back Jonas Hector has left many in awe of his defensive work rate in Bundesliga despite suffering relegation with Cologne. Low still values the 28-year-old's contribution.

In midfield, Khedira and the tempo-dictating Toni Kroos are expected to be break and attack from the middle of the park.

The former sits deep and stabilises the midfield, while three-time Champions League winner Kroos makes way for attackers to exploit spaces in the opponents half.

Arsenal star Mesut Ozil will combine upfront with Reus and Draxler. Low could make changes during pressure situations as apart from their flair in attack, is their defensive work-rate is highly spoken of.

It will be interesting to see 31-year-old Mario Gomez play upfront. Gomez is an out and out fox-in-the-box but inconsistent at the international level despite netting 31 goals for Nationalmannschaft.

Apart from Gomez, there is RB Leipzig’s Timo Werner. The 22-year-old forward won the Golden Boot with three goals at the Confederations Cup last year, for which Low had named an inexperienced squad that still managed to win the title.

Winning the group could be crucial though, as a second-place finish could set up a last-16 tie with Brazil. That would provide Brazil with an early chance to atone for 2014’s humiliation, something Germany will be keen to avoid at such a formative stage of the competition.

So, will England legend Gary Linekar’s famous quote - “Football is a simple game. Twenty-two men chase a ball for 90 minutes and at the end, the Germans win." - find relevance once again?

Only time will tell if it rings true.