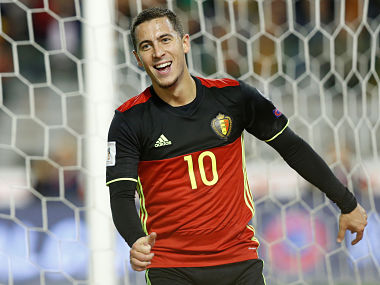 Brussels: Even today the marks on a board across a gap in the hedge in a small Belgian town are evidence of the youthful Eden Hazard's eager first steps as a footballer.

Hazard and his three younger brothers grew up in a home separated from Braine-le-Comte's Stade Sans Fond – or "bottomless stadium"– only by that hedge.

From the time he was old enough to kick, the tiny Hazard, now a star with Chelsea and a key to Belgium's World Cup hopes, would either abuse the hedge by slamming a ball against it or wriggle under the plank onto the field beyond.

"When Eden was five, he was too small to climb over the wooden fence," his father Thierry told AFP. "He found a space to sneak under to get on the football field."Eden played for the club that used the pitches, Stade Brainois, following two earlier generations of Hazards. Grandfather Francis was a founder 1969, Thierry played for the club and so did Eden and his bothers.

If Eden has become one of the icons of planet football it is because of the hundreds of hours spent hitting the ball on the grassy field at the end of own garden.

"There was no swing in the Hazard garden, just balls, those of Eden and also those that the Braine players skewed over the fence," club historian Pascal Demoitiez, told AFP in 2016.

As Eden blossomed in the field beyond the hedge, Demoitiez recalls that he "quickly understood that the kid had something more than the others."

"In the mid-90s when the surface had just been reseeded I remember shouting at a child who was playing even though it was forbidden," Demoitiez said, recalling an encounter when Hazard would have been six or seven.

"I saw that it was Eden who, in bare feet and from the edge of the penalty area, was systematically sending the ball into the top corner. I was blown away by this kid no taller than three apples."

Eden's first official coach was Michael Pauly, the son of the club president. He quickly realised that little Eden would become big.

"After a first training session, I said to my father: 'Dad, we have one who is exceptionally gifted'. It was Eden."

At every tournament, even against prestigious teams from abroad, Eden was inevitably named the best player.

"You had to be blind not to be aware of his qualities," said Thierry Hazard, who also coached his son. "But we told him not to dream too much of a pro career, you never know what life can do to you: I did not want him to fall from a great height."

Thierry had played semi-professionally, spending time in the second division with La Louviere, the town where Eden was born.

Eden's mother Carina was also a footballer, playing as a striker in the Belgian women's first division, retiring, she told Le Parisien newspaper in 2011, when she was three months pregnant with Eden.

Their sons all play football. Thorgan, at 25 just over two years younger than Eden and now with Borussia Moenchengladbach, is also in Belgium's provisional World Cup squad. Third brother, Kylian signed for Chelsea last year and, at 22, is in the club's development squad.

Until he was 10, Eden sparkled for Stade Brainois, whose directors still regret that, because of his youth, the club that polished this jewel could not ask a fee when he left for second division Tubize, 10 kilometres away.

When he was 14, Hazard moved across the border to the bigger pond of France joining Lille where he made his debut in the Ligue 1 at 16. He stayed with Lille for seven years, before moving to the English Premier League and joining Chelsea for a reported £32 million in 2012.

At 27, the kid who was once so small that he had to crawl under a board to reach the football field, has won league titles in France and England and amassed 82 international caps as he has grown into one of the reasons Belgium travels to the World Cup with high hopes.