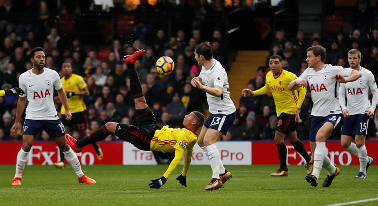 The financial terms were not disclosed but British media said Everton paid about 40 million pounds ($52.56 million) for Richarlison who has penned a five-year contract.

Everton announced the move on Tuesday evening. The 21-year-old Richarlison praised Toffees manager Silva, under whom he worked at Watford last season. “I think it is going to be important for me here to be with Marco Silva again,” Richarlison told Evertontv. “Everton have put their faith in me and I intend to honor this shirt and demonstrate on the pitch why I came here.”

Richarlison scored five times in his opening 12 Premier League matches last season but did not find the net again. Watford fired Silva in January. Silva said Richarlison “is fast, strong, very good technically and he can play in three positions across the front line. He can also score goals.”

Silva was appointed by Everton at the end of May, replacing Sam Allardyce.

Wolverhampton Wanderers have completed the signing of Portugal midfielder Joao Moutinho from Monaco for a reported 5 million pounds ($6.5 million).

Moutinho signed a two-year deal at Molineux with second-tier champion Wolves returning to the top flight after a six-year exile. The 31-year-old Moutinho won Euro 2016 with Portugal and has 113 caps for his country. He has spent the last five years at Monaco.

Fulham signed goalkeeper Fabri from Besiktas on a three-year deal. The 30-year-old Fabri arrived for an undisclosed fee. He reunites with Jose Sambade Carreira, the Fulham goalkeeping coach with whom he worked at Deportivo La Coruna. Fabri has also played for Real Valladolid, Recreativo Huelva, and Real Betis. He helped Besiktas win the Turkish Super League in 2017, and was named the league’s best goalkeeper for the last two years.

West Bromwich Albion completed the season-long loan signing of midfielder Harvey Barnes from Leicester. The 20-year-old Barnes signed a new four-year deal at Leicester and immediately moved to West Brom. Barnes made his Leicester debut in the 2016 Champions League. He spent time on loan at MK Dons and Barnsley last season, which he finished with five appearances for Leicester.

Tim Krul, the Netherlands star of a memorable penalty shootout at the 2014 World Cup, has signed a two-year deal with second-tier Norwich. The 30-year-old goalkeeper entered Dutch World Cup lore in the quarterfinals against Costa Rica in Brazil. Coach Louis van Gaal sent on Krul as a substitute in stoppage time at the end of extra time to be a penalty-saving specialist, replacing Jasper Cillessen.

Krul saved two spot-kicks as the Netherlands advanced to the semifinals. He was a free agent after spending last season as a backup with Brighton in the Premier League.