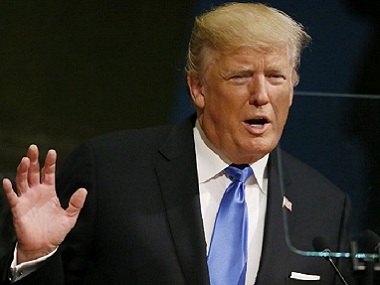 Washington: President Donald Trump inched closer to an all-out trade war with China by unveiling plans to impose 10 percent tariffs on an additional $200 billion worth of Chinese goods if Beijing doesn't bend to US demands.

With the world's two largest economies on the brink of a full-fledged confrontation, spooking markets and worrying business leaders, Trump said he was pushing forward with fresh punitive measures over Beijing's "unacceptable" move to raise its own tariffs.

"Further action must be taken to encourage China to change its unfair practices, open its market to United States goods and accept a more balanced trade relationship with the United States," Trump said in a statement.

The US president warned he would go even further, with punitive measures on an extra $200 billion of Chinese goods — for a possible total of $450 billion of goods, or most Chinese imports — "if China increases its tariffs yet again".

"The trade relationship between the US and China must be much more equitable," the president said in explaining his decision. "I have an excellent relationship with President Xi (Jinping), and we will continue working together on many issues. But the United States will no longer be taken advantage of on trade by China and other countries in the world."Last week, Trump announced 25 percent tariffs on $50 billion in Chinese imports, prompting Beijing to follow suit with matching duties on American imported goods. Trump had already warned at the time of "additional tariffs" should Beijing hit back with tit-for-tat duties on American goods.

China had offered to ramp up purchases of American goods by only $70 billion to help cut the yawning trade imbalance with the US, whereas Trump had demanded a $200 billion deficit cut.

And the China trade offensive is only one side of Trump's multi-front battle with all major US economic partners. Since 1 June, steel and aluminum imports from the European Union, Canada and Mexico have been hit with tariffs of 25 percent and 10 percent respectively.

"This latest action by China clearly indicates its determination to keep the US at a permanent and unfair disadvantage, which is reflected in our massive $376 billion trade imbalance in goods," Trump said about China's retaliatory tariffs. "This is unacceptable."

Two decades ago, China's economy was largely fueled by exports, but it has made progress in rebalancing towards domestic investment and consumption since the global financial crisis erupted last decade — limiting the damage trade tariffs could inflict on Beijing.

Still, strong exports this year have lifted the economy, which is now showing signs of losing steam under the weight of Beijing's war on debt, launched to clean up financial risks and rein in borrowing-fueled growth.

"China apparently has no intention of changing its unfair practices related to the acquisition of American intellectual property and technology," Trump said in a statement. "Rather than altering those practices, it is now threatening US companies, workers and farmers who have done nothing wrong."

Initially, 545 US products valued at $34 billion will be targeted by China, mimicking the Trump administration's tariff rollout.

These include major American exports to China such as soybeans, which brought in $14 billion in sales last year, and are grown in states that supported Trump during the 2016 presidential election. Politically important exports like other agricultural products and automobiles also made the list.

Beijing also drew up a second list of $16 billion in chemical and energy products to hit with new tariffs, though it did not announce a date for imposing them.