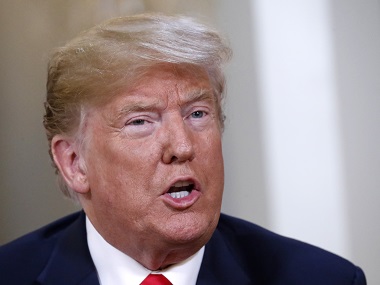 "I have said that numerous times before, and I would say that is true, yeah," Trump told CBSnews when asked if he agrees with the US intelligence assessment that Russia meddled in the 2016 elections. "But you haven't condemned Putin, specifically. Do you hold him personally responsible?" he was asked. "Well, I would, because he's in charge of the country. Just like I consider myself to be responsible for things that happen in this country. So certainly as the leader of a country you would have to hold him responsible," Trump said.

On Wednesday, the US president said that he believes in the assessment of his intelligence agencies that Russia interfered in American elections in 2016 and his remarks contrary to this a day earlier in Helsinki was a case of misspeaking.

Earlier, he had faced a barrage of criticism from his opponents and even from his own party for not backing the American intelligence community's assessment during a joint press conference with Putin in Helsinki on Monday. "Very strong on the fact that we can't have meddling, we can't have any of that – now look. We're also living in a grown-up world. Will a strong statement, you know, president (Barack) Obama supposedly made a strong statement – nobody heard it. "What they did hear is a statement he made to Putin's very close friend. And that statement was not acceptable. Didn't get very much play relatively speaking. But that statement was not acceptable. But I let him know we can't have this, we're not going to have it, and that's the way it's going to be," Trump added.