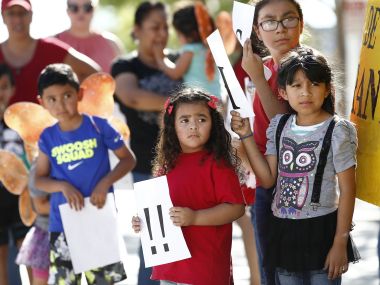 US President Donald Trump on Wednesday signed an executive order to end separation of immigrant families on the US-Mexico border, after images of children in cages sparked global outrage. In recent weeks, more than 2,500 such children were separated from their parents.

For now, family separation at the US border of (illegal) children and parents under a newly minted 'zero tolerance' policy has come to a screeching halt but multiple US immigration firestorms face do-or-die battles this week. Here is how the events unfolded amid global outcry:

It was a dramatic turnaround for Trump, who has been insisting, wrongly, that his administration had no choice but to separate families apprehended at the border because of federal law and a court decision.Already checked off the list is the big climbdown from US President Donald Trump Wednesday afternoon. He bowed  to all-round pressure from anxious allies and including from his wife Melania Trump and signed an executive order ending the process of separating children from families after they are detained crossing the U.S. border illegally.

"We're going to have strong, very strong borders, but we're going to keep the families together," said Trump who said he didn't like the "sight" or "feeling" of children separated from their parents.

Trump’s order will not end the “zero tolerance” policy though. That continues and adults who cross the border illegally will be prosecuted, just like they are now.

Trump has now looped in the Department of Defense to help house families while they are in custody.

Images of children held in cage like facilities cordoned off with wire mesh fencing have been seared into television screens all this week, sparking bipartisan outrage and calls for a swift U-turn.

Trump’s own party grandees, horrified at the prospect of what images of crying toddlers inside cages might do to their midterm election chances, forced Trump's hand Wednesday.

When will families be reunited?

Wednesday's executive order is not a clean break from status quo, though. The Trump administration still faces legal challenges because of a court order that caps how long immigration authorities may detain minors. The government is unable to clarify whether family separations would end immediately or when and how families now separated would be reunited.

Two immigration bills come up for a vote Thursday

Next on the menu are two immigration bills that Republicans are hoping to muscle into law - one led by House speaker Paul Ryan and the other by Bob Goodlatte.

Trump was unable to fully convince wary hardliners to back this carefully-crafted "compromise" immigration package. So GOP leaders are engaging in a frantic, last-minute whipping effort to try to move votes.

Chances look bleak so far because any bill to become law needs to pass both houses of Congress and needs a supermajority in the Senate.

This was tried and it bombed earlier this year. Why this time would be any different is not immediately clear although the decibel level has been cranked up because of election season.

What's being touted as a compromise bill is a compromise only as far as the Republicans are concerned. Even if one of the two bills passes the House and heads to the Senate, it will still need a supermajority to become law. In election season, that's a tall ask.

What's inside the compromise bill?

The so called "compromise" bill has an official name 'Border Secuity and immigration Reform Act' and is being led by House Speaker Paul Ryan.

It allows some Dreamers a meandering pathway to citizenship by allowing them to apply for a six-year work authorisation and then for green cards.

It allows the government to lock up kids but with their parents, rather than separately.

It promises more than $16 billion for Trump’s border wall.

It eliminates the diversity visa lottery and limits certain family-based visas - which hard-liners call “chain migration” and claim, wrongly, that it allows unlimited number of family members to migrate to the US.

It rolls back protections for asylum seekers and narrows the application criteria.

Do foreign workers figure in the compromise bill? Yes

Only the compromise bill would open a door to citizenship for young immigrants brought to the U.S. illegally as children.

If this bill passes, it would also allow the children of temporary foreign guest workers and “anyone who has a ‘contingent nonimmigrant status'” to apply for a pathway to a more permanent status in the US.

Children of E1, E2, H1B and L workers who have come into the country legally and been here for 10 years and on a legal status at the time of applying are eligible, from what we gather so far.

In the midst of a brand new set of hardline political goalposts, the stakes are high for foreign workers who are legally in the US - especially those who have applied for permanent residency (also called Green Cards) here and those whose children on dependent visas are 'aging out' while their parents face the prospect of waiting for decades for their PR status.

Many who are frustrated by the long waits are packing their bags for neighboring Canada or have already left.

Breitbart is calling the "cheap labour" compromise bill potentially the biggest "amnesty" in American history, without a "numerical cap" and "allowing for an endless amount of foreign nationals to obtain amnesty through this avenue known as Pathway Concept B."

Cato Institute, a think tank explains the other side of the story: As of 20 April this year, 632,219 Indian immigrants, spouses and minor children are waiting for green cards under three categories of employment based immigration - EB1, EB2 and EB3.

Green Card applicants who spoke with Firstpost reflect the gathering tension of simply not knowing how long they have to wait.

"We'll die before we get our Green Cards, it's become a joke", says one while many others like Vikram Rangnekar took quick decisions and moved north to Canada.

What's inside the Goodlatte bill?

This one is unlikely to pass without support from Republican moderates.

It grants DACA recipients temporary protections and no path to citizenship.

It cuts legal immigration, nixes the visa lottery and takes a sledgehammer to family-based immigration.

Can either bill get 218 votes in the US House of Representatives?

Both these bills come up in the House first and if one makes the cut, it must travel to the Senate for a nod. With less than 24 hours to go before the House votes on the much touted "compromise" bill, Republican leaders are still unsure if they can cobble the 218 votes needed for the bill to pass.

At around 6 pm EST Wednesday, conservatives were pushing for last-minute changes to the compromise bill, including language that could prevent DACA 'Dreamers' from being able to apply for green cards for their parents after they become citizens.

DACA is short for Deferred Action for Childhood Arrivals - an Obama era temporary protection against deportation granted to children brought into the US illegally.

Hardliners - especially NumbersUSA - have slammed the compromise bill as a "cheap labour" amnesty move which provides citizenship for up to 1.8 million DACA recipients. So far, the uproar is all about illegals but how long before this escalates into a full blown battle against legal immigrants too? It already seems to have reached that tipping point; it's just not official, that's all.