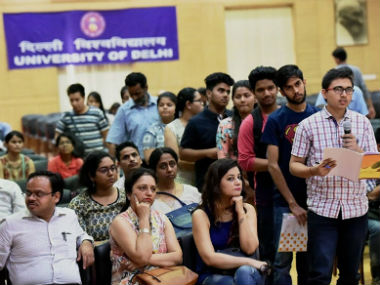 The Delhi University on Friday issued its third cut-off list for undergraduate students, although many prominent colleges didn't release any cut-offs for some courses.

With close to half of total seats already taken across 60-plus colleges of the varsity, many colleges still issued cut-offs for courses like English, Economics and Bachelor of Arts.

Here's a look at the cut-off percentages released by some of the colleges:

Lady Shri Ram College: LSR offered English Honours and Economics at 97.25 and 97.5 percent respectively. According to The Indian Express, cut-off for the Journalism course stood at 97.25 percent. However, admission has been closed for subjects like Hindi, History, Political Science and Psychology.

Shri Ram College of Commerce: SRCC, which teaches only two courses (Economics and BCom Honours), closed admissions for both after the second cut-off and didn't release a third list. The college didn't issue cut-offs for its courses in the general category.

Hans Raj College: English Honours and Economics have been offered at 95.75 percent and 97 percent. According to The Indian Express report, the college demanded 96 percent for Mathematics and Chemistry and 96.66 percent for Physics.

Hindu College: Admissions to BA (English), BA (Economics) and BCom (Honours) are still open. While it closed admission in most other courses, Hindu College asked for 96.75 percent and 97.5  percent for English and Economics respectively. Cut-off for the BCom (Honours) course is 97 percent. Admissions to BSc (Chemistry) are still open at 96.66 percent.

pooja chauhan 0 602 17 January 4.8 Education-Admissions Training
You Can Share It :