Delay in India-US 2+2 dialogue not indicative of plunge in ties; foreign policy commentary should strive to avoid political bias

Delay in India-US 2+2 dialogue not indicative of plunge in ties; foreign policy commentary should strive to avoid political bias 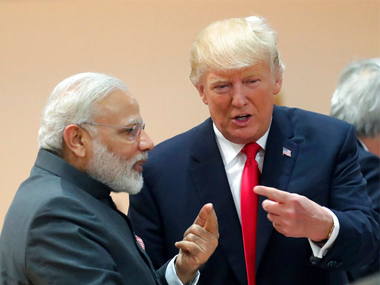 As we inch closer to 2019, one of the biggest political spectacles of our times, the stakes are incredibly high and rising still. And the impact is being reflected in diverse fields. Take international relations. Increasingly, there is nothing to distinguish between political and foreign policy commentary.

Democracies cannot really slot in different silos public opinion on matters related to international relations or internal politics but even allowing space for that spillover, we witness still a worrisome tilt towards partisan positioning and a sad lack of perspective in foreign policy commentary. Elaborate theories are being spun off from seemingly dubious logic and misleading narratives are being propagated in a fact-free environment.

The recent postponement of the US-India 2+2 dialogue has become a grand spectacle of confirmation bias. Some have interpreted it as a cataclysmic end to bilateral ties and a shining example of Narendra Modi's "disastrous" foreign policy. Senior Congress leader Mani Shankar Aiyar has announced that "Trump has put India its place" while noted editor Shekhar Gupta has declared in The Print that "India’s foreign relations resemble a train-wreck".

It is unclear what is meant by "all-weather friend" because these two nations have made no such announcement. India and the US are no treaty allies, have no formal alliances or even a strategic tie-up. India has, however, been designated by the Barack Obama administration in 2016 as 'major defence partner' that makes it easier for both nations to carry out defence cooperation.

This is, ironically, a greater area of priority for the Donald Trump administration which wants India to ditch Russia and import more arms and technology from the US. It stands to logic, therefore, that a "transactional" president (as Gupta describes Trump) will ensure that bilateral ties are not in decline, if only in self-interest.

Troughs and crests are normal in any relationship, more so between democracies where cacophony might sometimes be mistaken for policy. Tracing bilateral ties through the prism of bipolar disorder, however, makes for neurotic analyses. It might not be very incisive but plays into the larger political narrative against the Modi government (see here, here and here).

Thus, the domain of foreign policy becomes an extension of political theatre and stances are taken based not on a rational assessment of historical and recent trends but ideological and political bias.

For instance, Trump's berating of India on a trade deficit and perceived vacillation of mood vis-à-vis Modi is being put forward as indicative of a "slide" in bilateral ties. That is setting the bar really low for a White House incumbent whose mood fluctuates quicker than the British weather; who slaps tariffs on America's closest allies, throws a tantrum at the G7 meet, dismisses Canadian prime minister as "dishonest and weak", flies out halfway around the world to meet a tinpot dictator and hangs Kim Jong-un pictures in White House replacing those with Emmanuel Macron.

While we see that Trump has hurt America's closest allies and insulted their leaders, it is disingenuous to suggest that a perceived "shift" in his "mood" is indicative of a decline in US-India ties. It is equally important to remember that while Trump's disruptions make for optics of chaos, the underpinnings of NATO alliance is not at threat.

Trump isn't going to upend G7 and make Russia a treaty ally. These partisan positions, therefore, fail to take into account the structural compatibilities of India-US ties and the wide and deep areas of strategic convergence (thanks in no small measure to China's rise) that will continue to drive the relationship regardless of the political establishment at the helm.

It is worthwhile, therefore, to take off political blinkers and do a rational assessment of reasons behind the postponement of high-profile dialogue. To be clear, the development is unfortunate but not indicative of plunging ties. To interpret it so is to assume that the US wants to arm-twist India into making concessions and is using the dialogue as a leverage. This is erroneous on several counts.

One, dialogue mechanism is important to stabilise and solidify ties and iron out differences but it is not as if postponement will raise costs for India. The Trump administration has better leverages to wield if it really wanted to bully India. In fact, it is misleading to suggest that Trump wants to employ coercive tactics. Not only would it go against America's long-term interests, such methods sit at odds with US Indo-Pacific strategy.

The strategy, as Alex N Wong, deputy assistant secretary, Bureau of East Asian and Pacific Affairs in Trump administration recently explained in a policy briefing "acknowledges the historical reality and the current-day reality that South Asia, and in particular India, plays a key role in the Pacific and in East Asia and in Southeast Asia. That’s been true for thousands of years and it’s true today.

Secondly, it is in our interest, the US interest, as well as the interests of the region, that India plays an increasingly weighty role in the region. India is a nation that is invested in a free and open order. It is a democracy. It is a nation that can bookend and anchor the free and open order in the Indo-Pacific region, and it’s our policy to ensure that India does play that role, does become over time a more influential player in the region."

Besides, bilateral ties have been subjected to "unrealistic expectations" and "constant criticism", as Brookings India fellow Dhruva Jaishankar writes for NDTV. He explains: "developments in security relations over the past 18 months have surpassed expectations in several areas" and the US-India relationship today "encompasses a large variety of activities, from information sharing and joint exercises to defence sales and emerging industrial cooperation."

Short point, Trump didn't need to send US Ambassador to the United Nations Nikki Haley to India to explain his position on Iran and offer an olive branch on Chabahar if he wanted to use the suspension of dialogue as a coercive instrument. Moreover, the way US secretary of state Mike Pompeo handled the delay in talks suggests that it was close to a more mundane reason of scheduling issue than a deep conspiracy to undermine India.

Media reports have indicated that Pompeo is heading to North Korea around the exact time that he was (along with Jim Mattis) supposed to sit across the table with External Affairs Minister Sushma Swaraj and Defence Minister Nirmala Sitharaman. This raises the question why Trump administration would cancel scheduled talks (the first postponement was on account of Rex Tillerson's removal as secretary of state) in favour of unscheduled ones.

While disconcerting, the reason isn't hard to understand. Trump has put all his eggs in the North Korean basket while tom-tomming the success of talks with Kim and appears to have fallen prey to the same disease that afflicted earlier US administrations — taking the North Korean dictator at his words.

While Trump declared that he really "trusts Kim to follow through on his pledge to denuclearise", it turns out that the sceptics have been correct all along. Latest satellite pictures appear to show that Kim Jong-un is "completing a major expansion of a key missile-manufacturing plant" and US intelligence officials now believe that "North Korea does not intend to fully surrender its nuclear stockpile, and instead is considering ways to conceal the number of weapons it has and secret production facilities."

It implies that Trump's boasting may come to naught, and a panicky US president has asked the US secretary of state to fly to Pyonyang and continue US efforts to "force North Korea to denuclearise". It has to be Pompeo, because he is the sole point man on North Korea and there is no one else at State Department — not even a full-time envoy to oversee the negotiations, as Politico points out in a report.

Seema Sirohi explains how this led to eventual postponement of 2+2 talks in her piece for The Wire: "Turns out Pompeo pressed the point not once but twice to Trump that the 2+2 dialogue with India was coming up and he had to be in town. When Trump insisted the third time, Pompeo had no choice but to listen to his boss. In this administration, the boss really does decide almost everything important."

Nobody is saying that US-India ties are smooth as butter. No relationship is in the era of Trump. There are challenges to be met on Iran and Russia where India is on the firing line of secondary US sanctions. These ticking time bombs require considerable diplomatic skill from both sides to defuse. But to portray postponement of a dialogue as 'end of the world' and reflective of 'shambolic foreign policy' is myopic, misinformed and insincere.