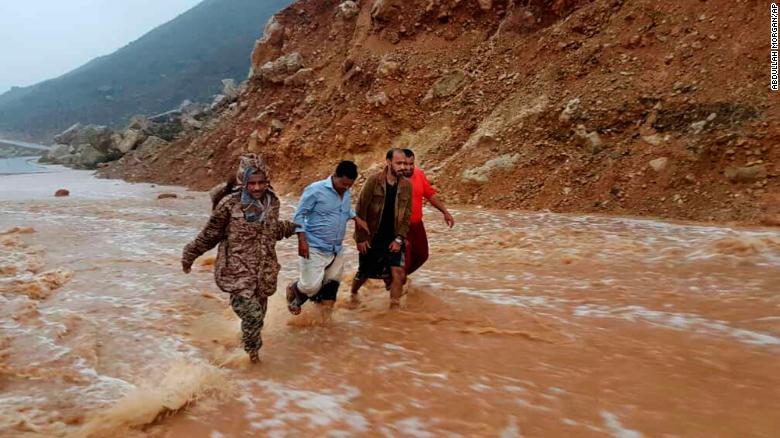 Tropical Cyclone Mekunu left behind death and destruction after sweeping through waters near Yemen's southern island of Socotra and pounding the island, a local official said Friday.

Landfall was expected later Friday near the border of mainland Yemen and Oman.

More than 45 people were unaccounted in Socotra on Friday afternoon, the official told CNN. And at least 11 people were killed in waters near the island when two ships went down in the pounding rain and wind, the official said.

Winds and rains have subsided a bit in the main Socotra city of Hadibu, but the cleanup was expected to be extensive.

Mekunu is now menacing coastal areas near the border of Yemen and Oman, with landfall expected west of the Omani city of Salalah late Friday afternoon or early evening local time.

Socotra province is "stricken with human and material damages at all levels," government spokesman Rajeh Badi is quoted as saying by state-run news agency Saba.

The United Nations recently declared the situation in Yemen the world's worst humanitarian crisis, with more than 22 million -- three-quarters of the population -- in need of aid and protection.

Rescue efforts to find the missing have been impeded in some areas of Socotra because of the cyclone's strength, the official said.

"Hundreds have left their homes, but the cyclone has even affected those who evacuated," the official said, citing flooded streets, disabled vehicles and power cutoffs.

The storm had sustained winds of 165 kilometers per hour (103 mph) earlier Friday, equivalent to the strength of a Category 2 hurricane, CNN forecasters said, with heavy bands of rain moving ashore. The strongest winds will be felt where the eye crosses the coast.

Mekunu could bring between 100 and 250 millimeters (roughly 4 to 10 inches) of rainfall, in an area that usually averages 100 millimeters or less in a year, along with coastal waves up to 30 feet high.

The US Embassy in Oman issued a weather alert advising people to avoid travel to the affected area until the storm dissipated.

"Residents of coastal areas in and around Salalah have been evacuated further inland," it said. "Expect heavy rains and strong winds with possible flooding, mudslides, power outages and difficult travel conditions in southern Oman."

emeni President Abdu Rabu Mansour Hadi deployed the Yemeni navy to assist in rescue and relief efforts on Socotra, which is listed as a UNESCO World Heritage Site for its biodiversity.
He also "called on all humanitarian organizations concerned with disaster relief to help with providing aid to the archipelago's people," according to Saba.

Saudi Arabia's ambassador to Yemen pledged to help authorities in Socotra in the aftermath of the storm, according to Saudi state news agency SPA. Military planes carrying "tens of thousands of tons of relief, shelter and medical supplies" will head to the island as soon as weather permits, said Mohammed Al-Jabir.

A storm of Cyclone Mekunu's magnitude is a rare occurrence in the Arabian Peninsula. In 50 years, only three hurricane-strength storms have hit the Gulf of Aden. None were in the area where Mekunu was forecast to make landfall.

Oman's Meteorology Directorate issued warnings for the Dhofar and Al Wusta coastal regions of heavy rainfall and strong winds, with rising sea levels that will cause floods. Residents were urged to stay out of the water because the sea was expected to be rough.

After making landfall, the cyclone was likely to dissipate within 24 to 48 hours after encountering the region's dry and rugged desert terrain, CNN forecasters said.

Cyclone Mekunu comes on the heels of another storm a week ago -- Cyclone Sagar. Although it caused little reported damage in Yemen and Oman, the storm pummeled nearby Somalia, where local media reported at least 31 dead and thousands displaced.

In 2007, Cyclone Gonu killed dozens and displaced thousands as it lashed through Oman as well as causing massive disruption to oil production.