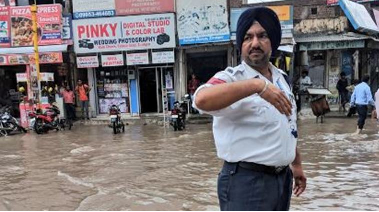 Actor Gul Panag had tweeted the pictures of two traffic constables working under the rains. Replying to Panag’s tweet, the CM said head constables Gurdhian Singh and Gurdev Singh will be honoured by ADG of Police (Traffic) on Thursday.

Punjab Chief Minister Captain Amarinder Singh has ordered that two traffic police head constables who regulated traffic during Wednesday’s downpour be honoured. The order was given after actor Gul Panag tweeted about the police personnel.

Panag tagged two pictures and said in her Tweet, “Dear Captain Amarinder sir, hard working policemen like this gentleman, would be immensely helped by good rain gear and a pat on the back. This is under the Zirakpur flyover, Patiala road.”

Replying to Panag’s tweet, the Captain said head constables Gurdhian Singh and Gurdev Singh will be honoured by Additional Director General of Police (Traffic) on Thursday with certificates of commendation and cash prize.

Both the head constables were deputed in Zirakpur traffic police and they regulated traffic during the heavy rain on Wednesday under Zirakpur flyover.