Chandigarh Railway Station is one of the best and smart stations in the entire Indian Railway circuit: Divisional Railway Manager

Chandigarh Railway Station is one of the best and smart stations in the entire Indian Railway circuit: Divisional Railway Manager 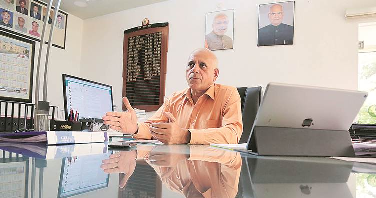 "Regarding the Panchkula side, some work has been done and we are improving it further. But, I am again saying that improvement will come up with IRSDC's plan," Divisional Railway Manager (DRM) Dinesh Chand Sharma said.

Recently, Union Minister for Railway Piyush Goyal said that there could be only one Shatabdi and one Tejas train running on Chandigarh-Delhi route instead of the existing three Shatabdi’s, because of less occupancy. What is your assessment?

Trains are introduced based on requirement. If there is more requirement, there will be more trains. If all trains on the particular route are running full, then railway will increase more trains. So, it is driven by demand…these decisions in any case are taken by Railway Board, which has all the data. They have all kind of scenario available and based on that the board takes a decision. At present, there is no such proposal to reduce Shatabdi’s on Chandigarh-Delhi route.

What is the current seat position in a Shatabdi? Do you think flexi fare sometimes is responsible for seats remaining vacant in the trains?

Probably, you will find that the seats are available in week days and during weekends, they are relatively full, but some seats are still vacant. Flexi fare this is a matter of research and division has not conducted any study.

Chandigarh residents are still waiting for introduction of Tejas on the Chandigarh-Delhi route.

The Rail Coach Factory (RCF), Kapurthala, has produced the first rake of Tejas. The Railway Board will take a decision, whether to run it between Chandigarh-Delhi, or to any other destination. It will be a high-level decision and we are just the implementation agency.

Why is the plan to revamp the Chandigarh Railway Station taking so long?

The Chandigarh Railway Station is one of the best and smart stations in the entire Indian Railway circuit. We are adding new facilities on a regular basis. Chandigarh is not lacking from that angle, because we have stations in Ambala division, far inferior to what we have here. The Indian Railway Station Development Corporation (IRSDC) is working on a big project. They are trying to develop the station commercially, which will give a boost to Chandigarh. It will be a quantum jump. Our agenda is to keep increasing the facilities, which we are doing, but the IRDSC will come up with a bigger project. A tender has been issued by the IRSDC and we will see when the tender comes up.

Security at the Chandigarh Railway Station is also a matter of concern. Hardly anyone is deployed at the station. What are you doing to solve the problem?

Coordination and regular meeting takes place between the Government Railways Police and Railway Protection Force (RPF). From RPF’s side(under railways), we have realised that the CCTV cameras at the station are old. We are now installing new cameras.

There are complaints that the Panchkula side of Chandigarh Railway Station is always ignored. No much development has taken place. What is your take?

Regarding the Panchkula side, some work has been done and we are improving it further. But, I am again saying that improvement will come up with IRSDC’s plan.

Any plans of introducing new trains on the Chandigarh-Delhi route?

New services are the domain of the Railway Board. But yes, from August 2, we upgraded the coaches of Chandigarh-Bandra train, and they have been replaced with coaches of Linke Hofmann Busch (LHB). These are modern coaches and safety-wise is also very good.

What are the plans to add facilities on the Kalka-Shimla route?

We are working on a mission plan for the Kalka- Shimla route. We are adding new facilities at Shimla Railway Station which gives the station a new look.

What are the plans to add facilities on the Kalka-Shimla route?

We are working on a mission plan for the Kalka- Shimla route. We are adding new facilities at Shimla Railway Station which gives the station a new look.

Is Railways working on any major plans for the region?

We have several new projects lined up. There is already a sanctioned work by Chandigarh-Baddi.There is a proposal of Yamunanagar to Chandigarh…we have a proposal which will connect existing station in Himachal Pradesh, Punjab and Haryana.

The Railway Minister recently said there should be a hop-on hop-off service on the Kalka-Shimla section.

Yes, it is a good concept and we have started working on it. For hop-on hop-off service, we need additional facilities at several railway stations which fall on the route. We are working on it.

There are frequent complaints about the food served on the trains, especially on Shatabdi’s on Chandigarh-Delhi route.

The Indian Railway Catering and Tourism Corporation(IRCTC) is responsible for the food. Today, if anyone has any complaint regarding the food served, they can directly approach them as they are available everywhere…naturally, expectation is very high. I believe, they have taken a decision; they will simplify the menu and improve the quality.

Run over by trains on railway track is another serious issue in Ambala division?

The matter is serious. The GRP deals with such cases because report goes to them. The incidents are hurting the railways because when such incident happens, trains get delayed, which leads to delay of more trains. Cattle run over is also another problem…but media has a role to play to create awareness and educate people regarding the issue.