Can Narendra Modi's 'chaos theory' mitigate the challenge of mega Opposition in 2019?

Can Narendra Modi's 'chaos theory' mitigate the challenge of mega Opposition in 2019? 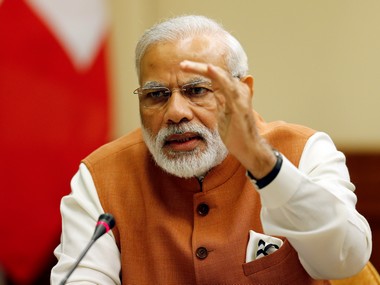 Narendra Modi's exhaustive interview conducted by the Swarajya magazine throws incisive light on the tactics that BJP may adopt in 2019. A detailed list of questions covering diverse topics elicited an even more detailed response from the prime minister, revealing the strengths that he may bank on and the vulnerabilities that he must grapple with.

It was apparent that Modi recognises the true nature of the perception battle that he must conquer to seal a return mandate next year. And he also seemed aware of his biggest handicap going into the battle — in his quest for deep-seated, structural reforms that may carry long-term benefits for the economy, Modi has inflicted short-term pain on the electorate.
This provides the Opposition with a handy stick. While the reforms are necessary in order to usher in true "achhe din", the transitional cost of these key reforms can have a magnifier effect if juxtaposed with the promise of "achhe din". To mitigate this challenge, Modi must convince the electorate that he is on the right path, give a detailed account of the steps that he has taken to deliver on his promise and hope that public imposes trust in his intentions. This is crucial, because unlike in 2014 he can no longer bank on a narrative of hope. Some of these cues were apparent from the interview while some less so.

Aside of these signals, it was also interesting to note how Modi plans to counter the increase in Opposition unity index. It is almost a given that in 2019, the Congress will play the role of a facilitator and try to bring all non-BJP parties on a common platform — either on a pre-poll or post-poll arrangement. The prime minister hopes to offset this strategy through twin planks of chaos theory and development.
The "chaos theory" is Modi's gambit to show that even if the Opposition were to stitch an "anti-Modi" alliance (which he dismissed as unlikely), it will make for an unstable arrangement where the partners would be too busy mitigating inherent challenges to focus on governance.

"In any election, a non-ideological and opportunist coalition is the best guarantee for chaos. The next election will be a choice between governance and development on one side and chaos on the other," he said during the interview.

Conversely, this casts BJP in a favourable light as the only party that may prevent India from slipping into chaos and provide the stability that the nation needs. Modi also portrayed the "mahagathbandhan" as a grand alliance of power hungry leaders who have no agenda except "personal survival" and "removal of Modi". He also drove a distinction between the political situation in 1977, 1989 (when a grand alliance came together to defeat the Congress) and 2019. According to him, while 1977 and 1989 were necessitated by the Emergency and the Bofors scandal, the 2019 'mahagathbandhan' has no such noble objectives.

Modi is on firm ground here. The Congress-JD(S) coalition that was hastily stitched to keep BJP, the single largest party, out of power in Karnataka has courted negative publicity almost since inception. The rash of stories on internal rifts between coalition partners (see here, here and here) have done nothing to convey an image of stability.

In an election season when the Opposition is striving to put up an united front to ostensibly "save democracy", Congress-JD(S) tussle carries an impression that a coalition based on a negative agenda (to deny BJP power) will be self-destructive. Modi pointed out the "dislike and mistrust" between leaders and their competing positions at the regional level to claim that the alliance won't be stable, which reduces the possibility of national interest and growth being the focal points.

He gave Karnataka as an example where ministers meet each other not "to solve development issues" but "to quell infighting! Development has taken a back seat."

The tactician in Modi emerged when he sought to stoke the embers of the coalition, insisting that Congress's courting of allies has been forced by an existential crisis in its ranks, not an overhaul of its core thinking. The mention of HD Deve Gowda was not to be missed, a reminder of events when the Congress had pulled the rug from under his feet in 1997.

Modi's barb comes in light of media reports that indicate that the JD(S) patriarch is unhappy with the way Congress is treating his party. (See here and here)

While Modi seemed to be keeping the door ajar for JD(S) to enter the NDA stable, he also sought to allay apprehensions over BJP's trouble with allies. He mounted a spirited defence that the NDA is "a large and happy family of over 20 parties" that is in power in numerous states.

Modi isn't technically wrong but critics will question NDA's "happiness" quotient. Chandrababu Naidu has walked out. Shiv Sena continues to behave like a jilted lover and Nitish Kumar seeks to take another U-turn. Modi's vehemence could be a sign of denial but it could just as well be an acknowledgement of the power principle. Modi has remained in politics long enough to know that it is power that glues parties together, not ideology, and if BJP returns with a handsome mandate, allies will follow.

If Modi wants to fashion 2019 as a battle between "good governance and development" on the one hand and "chaos" on the other, then he must address the communication failure that has been his government's biggest bane. Work has been done, but it must also be seen to be done.

As economist Arvind Panagariya, the former NITI Aayog vice chairman, has written in Foreign Affairs, "Over the past four years, the Modi government has made great progress in reforming the economy to deliver greater growth and prosperity. Although many of its policies have already had a marked effect, most will yield their full impact only in the longer run…"

Inherent in the prime minister's detailed account of his performance and achievements was the tacit admission that despite heavy dependence on new-age tools, the full extent of government's work has not been communicated to the masses. On jobs, for instance, Modi admitted that lack of good data has skewered the scope of debate and made it impossible to have a rational assessment. In that respect, if the traditional matrix of measuring jobs data is inaccurate, then it is also the government's responsibility to improve the quality of data. In absence of primary data, the prime minister sought to base his claim on tertiary evidence that if states are producing "53 lakh jobs" (Karnataka) or "68 lakh jobs" (West Bengal) then "is it possible that states are creating jobs but the Centre is creating joblessness?"

On GST, for instance, where the government has come under fire from Opposition and critics on "poor implementation" and a "complex structure" for a "simple tax", Modi was at pains to point out that government has been sensitive to criticism and has been working proactively to sort of out teething issues. Once again, it is the government's job to explain the nature of transitory costs that such a reform brings and drive home the message that short term pain will lead to long term gain — a task which the BJP government has failed to do.

Though the Modi government has turned the economy around from the morass where it was left by UPA 2, the point has not been pressed enough. In not bringing out a white paper to reveal the true nature of the economy in 2014, the BJP may have made it easier for the likes of P Chidambaram to take aim at BJP for "economic mismanagement" when ideally the UPA-era finance minister should be made accountable for his "budget jugglery". Modi held he chose "rashtraneeti" in not highlighting economic woes over "rajneeti" to spare the already depressed sentiment any more woes.

The larger point, though, is that a less-than-impressive communication strategy has made it difficult for Modi to string coherently the story of BJP's performance. Hence we find in the interview a constant urge to furnish data and substantiate numbers. It remains to be seen if BJP's famed electoral machinery is enough to cover the gap between perception and reality.