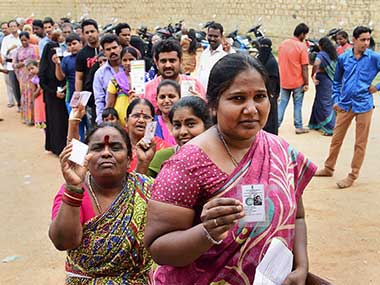 The voters of the country have plenty on their plate today as polling is underway in 10 Assembly and four Lok Sabha seatsincluding the controversy-hit RR Nagar Karnataka Assembly seat.

While in North, the focus is on Kairana and Noorpur in Uttar Pradesh where regional parties seem to have aligned together as a united opposition against the Bharatiya Janata Party (BJP), voting will also be done for the Palghar seat in Maharashtra which is a test for the BJP-Shiv Sena relationship. Apart from these bypolls are also scheduled in a seat each in West Bengal, Meghalaya, Nagaland, Uttrakhand, Punjab and Kerala and Bihar.

Uttar Pradesh's Kairana is a Lok Sabha seat with five Assembly segments and an electorate of nearly 1.7 million, according to a Hindustan Times report. It has a significant number of Muslims, Jats and Dalit voters and also houses the Most Backward Class (MBC) category which the ruling party, BJP, is trying to woo to tilt the outcome in its favour.

The Kairana bypoll was scheduled following the death of BJP MP Hukum Singh whose daughter Mriganka Singh is now the BJP nominee for the seat. She is up against Rashtriya Lok Dal's (RLD) Tabassum Hasan, who is being supported by the Congress, Samajwadi Party (SP) and the Bahujan Samaj Party (BSP).

Meanwhile, in Noorpur Assembly seat, BSP and RLD have backed SP candidate Naim-ul-Hasan. The bypolls here had been necessitated due to the death of two-time BJP MLA Lokendra Singh Chouhan in a road accident in February. His widow, Avani Singh, is now fighting the election on the BJP ticket. Hasan had been defeated by Chauhan in the 2017 elections. According to Financial Express, Mayawati's BSP is not contesting here but other candidates in the fray are: Bharatiya Momin Front’s Maya, Lok Dal’s Gohar Iqbal, Uttar Pradesh Republican Party’s Ram Ratan and Rashtriya Janhit Sangharsh Party’s Zaheer Alam.While RLD looks to regain the Jat voter base in Kairana, locals have raised the issue of the distress of sugarcane farmers. Another contentious issue here is of the alleged Hindu mass exodus from the area in 2017 which happened just before the Assembly elections in the state, states an NDTVreport.

Shifting focus to another major state, Maharashtra, where two Lok Sabha seats are being contended closely. In Palghar, BJP and Shiv Sena are up against each other while NCP has declared its support for Congress. The seat fell vacant due to the sudden demise of sitting BJP MP Chintaman Wanga, whose son has been given a Shiv Sena ticket. BJP has, in-turn, nominated Congress deserter Rajendra Gavit. The constituency has a significant North Indian and Gujarati population which the BJP looks to tap. The Congress, on the other hand, has fielded Damu Shingda, while the Bahujan Vikas Aghadi, a local party dominant in the belt, has fielded Baliram Jadhav. However, as per a Hindustan Times report, the tribal population of Talasari, Vikramgad and Jawhar is divided between the Congress, CPM and BJP.

While in Bhandara-Gondia, BJP will lock horns with NCP after the Lok Sabha seat was vacated following the resignation of sitting BJP MP Nana Patole in December 2017, who later joined Congress. NCP has fielded Madhukar Kukde while the BJP has nominated Hemant Patle. The area has been considered a stronghold of the NCP's Praful Patel.

A Maharashtra Assembly seat, Palus-Kadegaon, is also seeing election today. Interestingly, this is the only bypoll that already has a result without voting. The bypoll was necessitated by the death of Congress' Patangrao Kadam, who was a two-time MLA. The Election Commission declared Patangrao's son and Congress candidate Vishwajeet Kadam as having been elected unopposed after the BJP withdrew its candidate learning of Shiv Sena's support for the Congress.

Coming back to the Karnataka political battleground, the Rajarajeshwari Nagar Assembly seat will see a crucial fight even as the JD(S)-Congress combine didn't decide on fielding a unanimous candidate. The Congress has fielded former RR Nagar MLA Muniratna, while the BJP has nominated P Muniraju Gowda and the JD(S) had announced G.H.Ramachandra, who was previously with the BJP, as its candidate. The election to this constituency was deferred after 10,000 fake voter ID cards were found at a flat in the area.

Meanwhile, in Uttrakhand where by-elections are due in Tharali (SC) constituency post the death of sitting BJP MLA Magan Lal Shah in February, the BJP has nominated Shah's wife, Munni Devi, as its candidate. While former MLA Jeet Ram is again contesting for the Congress.

In Punjab, the Shahkot constituency will see a three-way contest between the AAP, the SAD and the Congress. Necessitated by the death of Shiromani Akali Dal (SAD) MLA Ajit Singh Kohar in February, the bypolls to Shahkot have seen roadshow campaigning by Captain Amarinder Singh and Sukhbir Badal. The Akali Dal has nominated Ajit’s son, Naib Singh Kohar, as its candidate and the Congress has nominated Hardev Singh Laddi, who had lost to Ajit in 2017. This election is crucial for AAP to regain in its tethering presence in Punjab.

Down south, Kerala’s Chengannur assembly seat in Alappuzha district will see a three-way contest this time between the Left Democratic Front (LDF), the United Democratic Front (UDF) and the BJP. The bypoll is being held following the death of CPM MLA K K Ramachandran Nair in January 2018. Chief Minister Pinarayi Vijayan has campaigned extensively for CPM candidate Saji Cherian. While in this erstwhile Congress stronghold, being represented by D. Vijayakumar, the BJP has fielded national executive member PS Sreedharan Pillai considering the constituency has a sizeable Nair population.

Two North East states are also witnessing by-elections on Monday. In Nagaland, elections are being held in the lone Lok Sabha seat which has been vacant after the Nationalist Democratic Progressive Party (NDPP) leader Neiphiu Rio, who is now the chief minister of Nagaland, resigned as a Lok Sabha member in February. The by-poll is a straight contest between the ruling Peoples Democratic Alliance (PDA)- which includes the NDPP and BJP as constituents- candidate Tokheho Yepthomi and Naga People's Front (NPF) nominee C Apok Jamir who is getting support from the Congress.

While in Meghalaya’s Ampati seat, the fight is mainly between the Congress and the BJP-backed National Peoples Party. The Congress here had won 21 seats in the February assembly polls, but the count came down to 20 with former chief minister Mukul Sangma vacating the seat for retaining Songsak constituency. The NPP with 19 MLAs is leading a coalition government and a win for the Congress will make them the single-largest party in the state, changing political equations drastically. Thus, keeping in with the sentiments, the Congress's candidate this time is Sangma's daughter Miani D. Shira while the National People's Party has renominated Clement G. Momin, who had lost to Sangma in 2013.

Meanwhile, in West Bengal's Maheshtala Assembly seat will witness a three-cornered contest among the ruling Trinamool Congress (TMC), the BJP and the Left Front. The bypoll was necessitated by the death of two-time TMC MLA Kasturi Das in February 2018. The TMC has nominated Dulal Das, Kasturi's husband, for the bypolls while Surjit Ghosh is the BJP's candidate. CPM has fielded Prabhat Chowdhury in the fray who has the support of the Congress party.

In Bihar's Jokihat, bypoll was necessitated when MLA Sarfaraz Alam won the Araria Lok Sabha bypoll in April 2018 as an RJD member. According to The Week, Sarfaraz, who had won the Jokihat seat on a JD(U) ticket, left the party after it restarted its alliance with the BJP last year. The JD(U), who has won the last four Assembly elections here, has nominated Murshid Alam as its candidate while the RJD has put up Sarfaraz's brother, Shahnawaz's candidature.

Lastly, two Assembly seats are up for a contest in Jharkhand as well. In Gomia, sitting MLA Yogendra Prasad Mahto of the Jharkhand Mukti Morcha (JMM) was expelled from the Assembly after he was convicted in a coal theft case. Mahto had won the seat in 2014 by defeating his BJP rival Madhav Lal Singh. Singh, who had won the seat on a Congress ticket in 2009, has been renominated by the BJP. The JMM is now fielding Mahto's wife, Babita Devi who has the support of all other parties including the Congress.

And in Silli, the bypoll is happening because sitting MLA Amit Mahto of the JMM was convicted in a criminal assault case in March. In 2014, Amit had defeated All Jharkhand Students Union chief Sudesh Mahto, who had held the seat for over 10 years. Sudesh is contesting the election again, with the BJP's support this time and just like in Gomia, the JMM has fielded the 'ousted' MLA's wife, Seema Mahto.

These bypolls are crucial for the BJP to maintain its majority in Parliament, where it currently has 274 seats. And it remains to be seen if the ruling party at the Centre will be able to retain its foothold amid regional backlash from a united Opposition. The counting for these polls is scheduled for 31 May