'Building a house for which he was pillar': RSS worker BN Prahlad to honour brother's legacy by contesting Jayanagar bypoll

'Building a house for which he was pillar': RSS worker BN Prahlad to honour brother's legacy by contesting Jayanagar bypoll 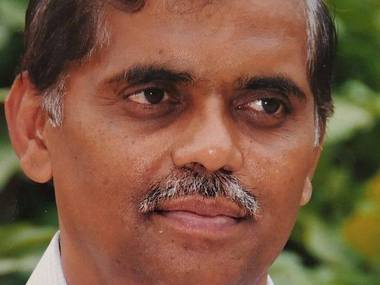 RSS worker BN Prahlad says he will mourn the death of his brother Vijay Kumar and honour his legacy by contesting from Bengaluru's Jayanagar constituency. Kumar, a BJP MLA who passed away due to a heart attack while campaigning, was primed to win the Jayanagar Assembly seat.

Though Ramalinga Reddy’s daughter Sowmya generated good support, the youngest of Kumar’s five siblings is confident of victory. Prahlad, 57, who has worked with the RSS-affiliated social organisation Rashtrottahana Parishat for 18 years, said his brother’s image and his contribution to society is something voters will not forget and help him win.

Did you volunteer to contest the elections after your brother’s death?Edited excerpts of his interview with Firstpostfollow:

Prahlad: My brother has contributed a lot to Jayanagar. The RSS and BJP high command and those who supported my brother told me I would be right for this position. I didn’t choose it; it came to me unknowingly. After my brother passed away, leaders like Amit Shah and Ananth Kumar visited and offered condolences… They (the central leadership) approached me and told me to take his place.

Do you think you'll be able to meet the standards your brother set as an MLA?

Prahlad: It is very difficult to reach my brother’s standards. The amount of patience he had, his politeness of accepting everything the way it is and not blaming it on someone. He was very talented and highly intelligent. I don’t think I will be able to be even 1 percent of what he used to be.

What changes do you want to see in your constituency?

Prahlad: I want to bring about many changes and implement several things like my brother did during his days as an MLA. He was the one who installed a drip irrigation plant in Jayanagar… If I become an MLA, I will talk to people, figure out their problems directly and definitely try finding solutions.

Are you receiving good support?

Prahlad: I have received a very good response from the people. When my brother passed away, many people gathered outside our house to pay their respects. They are with me and will give me their full support. People who I haven’t spoken to in decades are calling me up and extending their full support.

Have you started campaigning?

Prahlad: The nomination will be filed on 25 May and only after that will we start campaigning. As I’m new in this field, the party’s high command will help plan my campaign. The Karnataka BJP president asked to me wait for now.

Is your family supportive of you contesting?

Prahlad: Initially, my family told me not to contest. First my wife said no and then my elder brother said no. They said things should happen by itself; I had to earn the nomination. But they told me to accept if the party (BJP) or the Sangh Parivar asks me to contest.

Do you think your opponents have a stronger chance of winning?

Prahlad: What my brother has done for Jayanagar is beyond words. The amount of effort he invested to develop Jayanagar is not everyone’s cup of tea. I’m contesting under his umbrella and am hence sure I'll get the support of people and defeat all my opponents. There was a 100 percent chance of my brother winning. He would have won the elections with a margin of at least 30,000 votes. I feel the same people who supported him will help me win.

What strengths and weakness do you think people see in you?

Prahlad: My biggest strength is my brother. I will be building a house for which he has been the pillar for almost a decade. My biggest weakness is that I am impatient and react to things very fast. My brother was a very polite man. Even though he had so much of work pressure he used to be remain calm.

Now that the JD(S)-Congress alliance has formed the Karnataka government, do you think people will vote for the BJP?

Prahlad: People will vote for the party which has done good for society and the candidate who will help people. As far as Jayanagar is concerned, the BJP has been ruling for the last two decades and they have done tremendous work. So, I think people will definitely choose a party based on the kind of work they do and not by who has formed the government.

You are not a known face in the party. Do you think it will affect your vote share?

Prahlad: I have learnt how to interact with people from my daughter; she has been performing on stage for over 13 years. The political thing is an entirely different chapter in my life. I think the fact that all my family members are into social work will get me the support of the people.

What problems do you think needs immediate redressal in your constituency?

Prahlad: Traffic congestion is the main problem here; apart from that, garbage is an issue and old trees are falling. There are several challenges for me. If I win, I will adhere to my responsibilities, if I lose, I’ll continue fighting for the causes I believe in.