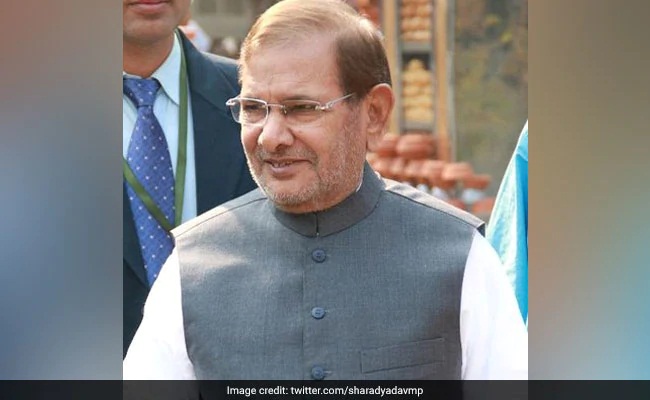 JAIPUR: Loktantrik Janta Dal leader Sharad Yadav appealed to opposition parties to resolve their differences and come together to "save democracy and the Constitution", which he claimed was in danger.
He said the opposition parties should "uproot" the BJP from the Centre as well as Rajasthan.

It is the need of the hour as the country's democracy and Constitution are in danger under the present dispensation, Mr Yadav claimed here while addressing party workers.

The former Rajya Sabha MP claimed he regretted having campaigned in the past for Chief Minister Vasundhara Raje, saying people were being killed under her dispensation in the name of cows.

Mr Yadav claimed that 102 people were killed by mobs in different parts of the country in recent years. The Non Performing Assets (NPAs) of banks have risen to an alarming level under Prime Minister Narendra Modi's government and it has not been able to ensure the extradition of looters such as Nirav Modi, Vijay Mallya, Lalit Modi from other countries in the last four years, he added.

"There is a difference in BJP's words and deeds...Repeated lies pose danger to democracy," Mr Yadav alleged.

Hitting out at the BJP's leadership in Rajasthan, he said Chief Minister Vasundhara Raje's 'Gaurav Yatra' was a "blot". The chief minister had not done any such work in the state in the last four years for which she had to undertake any journey, he said taking a jibe.

Mr Yadav alleged the state government had worked to destroy rivers that restricted water inflow to Ramgarh dam, a lifeline for residents of Jaipur, to sell the land to mafia and builders.

He called upon party workers to resolve to defeat the BJP in the upcoming Assembly elections in the state.