‘Before starting a challan drive, we want to spend maximum time on creating awareness’: Chandigarh SSP

‘Before starting a challan drive, we want to spend maximum time on creating awareness’: Chandigarh SSP 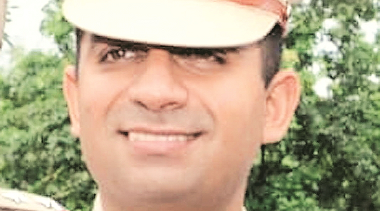 Chandigarh's top traffic policeman, SSP Shashank Anand, whose phone's ringtone is a song urging women to use helmets, tells Chandigarh Newsline how he is going to persuade women two-wheeler riders to observe the new rule in their own interests

How important is the latest decision to make helmets necessary for women in Chandigarh?

Certainly, it is a landmark decision keeping in view the security of women riding two-wheelers. The decision of the UT administration and the intervention by the Punjab and Haryana High Court has highlighted the issue and brought to the notice of general public. After all, the decision is for the safety of women. And I personally feel, women of Chandigarh have accepted this decision.

Is Chandigarh traffic police ready to impose this rule strictly in the city?

First of all, I want to say that such rules cannot be imposed with a strict attitude. People follow such rules as they become aware and start understanding that this is the need of the hour. We (Chandigarh traffic police) are doing our best to educate every woman about the benefit of helmets and safety gears. We are trying to interact with more women riders on the roads to motivate them to use helmets. I believe some women of Chandigarh understand the importance of wearing helmets. Before we start a challan drive, we want to spend maximum time to create awareness.

When will you begin the challan drive against women for not wearing helmets?

At present, our focus is on creating awareness. And in the process, we have decided to inform the general public well in advance about the exact date of challan drive. We do not want to leave a single chance for the public to complain that they were not informed by Chandigarh Police about the drive against women for not wearing the safety gears.

What about Sikh organisations, which have made representations against this rule?

Until now, I have not received any such representation. The latest notification, which makes helmet necessary for women, exempts Sikh turbaned women from wearing helmets. We are interacting with people belonging to different walks of society and motivating them to wear helmets.

Panchkula police have challaned more than 1,000 women two-wheeler riders in the last one and half months and here in Chandigarh, traffic police is working on awareness drive. Why?

In Haryana, the helmet rule for women has been there for a long time. Haryana government has amended the Motor Vehicle Act a long time back making helmet necessary for women. But here in Chandigarh, the rule has just come in. It does not look good that we immediately start the challan drive. The drive being carried out by Panchkula traffic police has had an impact. Our traffic policemen have noticed that women entering Chandigarh from Panchkula have started wearing helmets.

What kind of methods are being adopted for spreading awareness among women?

We are adopting all kind of methods. From visiting schools, colleges, government and private institutes, free helmets were also distributed to women. In appreciation, women who have started wearing helmets, we have also been distributing free fuel vouchers of Rs 100. Besides these, we are also taking the assistance of actors to play the role of Yamraj and make the point about why helmets are necessary. One of our policeman, head constable (HC) Bhupinder Singh even composed a song urging women to wear helmets.

Is the present infrastructure sufficient for challaning women for not wearing helmets?

We have enough manpower in traffic police. Head constables and ranks above can issue challans. We have sufficient number of women head constables also in the traffic police. If the need arises, we will add more personnel. We are also making a road map on how to implement this new rule through the challan drive.

Do you believe that women will follow the new rule of wearing helmet?

Why not? It is all for their safety. Chandigarh is a city of educated people and I hope women will leave behind the men in following the traffic rules and regulation, particularly, that of wearing helmets.