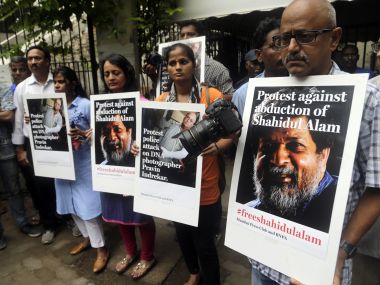 The nine-day long Bangladesh youth protests, which started after speeding buses killed students on 29 July, jolted the nation as allegations of gross human rights violations were reported against the ruling Sheikh Hasina government. The pro-government activists, members of a political youth league, attacked at least five journalists, including award-winning photographer Shahidul Alam. Footage of the attack on journalists and students went viral on social media as the protests became a serious embarrassment to the Awami League government ahead of a General Election due in December. The protests raised important questions about human rights, freedom of expression and the role urban elite should play in social justice movements in Bangladesh.

Firstpost spoke to Abu Sayeed Al Mahmood Swapan, who is a Member of Parliament and the Organising Secretary of the Bangladesh Awami League. Here are the excerpts from the interview.

Your government has received a lot of flak in the past week for the manner in which it has dealt with student protests.

Bangladesh is an emerging country and the purchasing power of the people has seen a tremendous increase in the last few years. Economy is also improving. As a result, in Dhaka city for instance, there are traffic jams all the time because of roads not being able to accommodate the growing vehicular population. We are trying to fix this situation. The government has sanctioned flyovers and the metro rail is also under construction. For some years, there won’t be any solution to this problem.

But isn’t the problem that the students were highlighting one of regulation? That majority of these vehicles are being driven by people who don’t possess licenses and follow rules?

The problem is that the behaviour of those driving these vehicles, like drivers and helpers, is not very good. They are rude and this leads to misunderstandings. But what you need to understand is that this is beyond just drivers possessing licenses, this is a force which is trying hard to destabilise this government. The student’s movements was influenced by miscreants from Bangladesh Nationalist Party (BNP), Bangladesh Jamaat-e-Islami and other left-leaning organisations. Most of them were wearing uniforms, using fake ID's and just pretending to be students.

Yes, I acknowledge that there is a problem in the traffic system, there are no two ways about it. When students started their agitation, we fully supported it. That is why we didn’t stop them or take any action against them. We just waited for the movement to run its due course, because the government is aware that there are many problems faced by our people on the road. We know there will be problems as most roads are under construction and we are trying to handle it. We are trying hard to fix these problems.But just alleging involvement of opposition forces is being dismissive of an outrage which started organically, like everybody saw. Even you’ve acknowledged that there are problems in the system.

While that might be true, why couldn’t the government engage in a conversation with the protesting students, majority of whom were very young?

We tried our best to communicate with the students but these protests weren’t organised. They didn't have a leader. We were trying to reach out to individuals while letting the protests take its due course. But taking advantage of this, politically motivated miscreants used social media to provoke violence. See, there is an election coming up in December. These protests were the perfect excuse for the opposition to discredit the government.

The student movement has, contrary to what you are saying, blamed the Bangladeshi Chhatra League for spearheading violence.

This is completely false. The student’s wing is not involved in any kind of violence. In fact, they tried to convince the students that the government has agreed to look into the demands on the first day itself. They tried to get the young students to give up their protests and return to school. We had communicated to these students that in the upcoming cabinet meeting, we will revise the law, as there is a process for these things. Like we promised, we’ve done that too. The truth is BNP and Jamaat orchestrated the violence and has blamed us for it. From 1971, we are being blamed by these forces of being pro-Indian. We want to work with the Indian government and other governments in the region, what is wrong in that? In fact the problem is these forces do not want a peaceful Bangladesh.

Yes, Shahidul Alam has been arrested for misconduct and misleading the public. Nobody can escape the law. Even I am not above the law.

Why can’t the Awami League government just deal with criticism like it should, instead of attacking students and arresting journalists?

The government did not come down on the students. In fact, like I said, we continuously tried to engage with them. Shahajahan Khan’s comment, which the media highlighted repeatedly, apologised for being insensitive. He visited the homes of those who passed away in the accident and he apologised for his comments. What more can we do?

Protests which were going peacefully ended in violence, and your government is being blamed for this. Don’t you think this is going to affect future prospects of the Awami League?

We just have to wait for a few days for the true picture to emerge. There has been so much misinformation and rumour mongering which has taken place, with no proof of any sort to back it. Messages were passed on social media that rapes and violence was taking place at the Awami League Party Office. The party office is a holy place, how can one even make up such rumours? Has any political party in the world used its office to publicly display acts of violence? Such illogical rumours were floated around. I agree there is a lot of work that our government needs to do but let us wait for a few days, everything will be clear about our role.