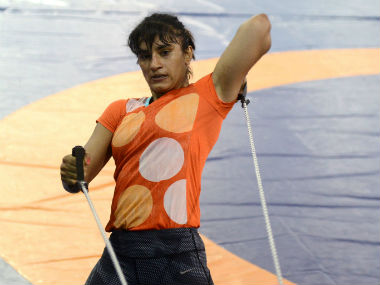 Vinesh Phogat ended up with bronze in the last edition of the Asian Games in 2014, but believes that she is a lot more experienced this time around, and is more hopeful than ever of finally winning a gold at the event.

Vinesh fell short of reaching the final in the 2014 Incheon Asian Games, losing to Japan's Eri Tosaka, before qualifying for the bronze medal match and defeating Mongolia's Narangerel Eredenesukh to earn a podium finish. The grappler, though, believes that she understands the sport, and her opponents, a lot better now than when she was 20.

"Back then, I was quite young. Now, I have experience on my side, and would want to make full use of that. I will give my best to change the colour of the medal that I win, preferably gold, as there’s nothing that exceeds gold," Vinesh told reporters on the sidelines of a send-off event organised by Tata Motors, Wrestling Federation of India's (WFI) principal sponsor, in New Delhi on Sunday."I have a lot of experience right now, and have started understand wrestling in general, as well as my opponents, a lot better. I wouldn’t want to restrict myself to just bronze this time around.

Vinesh, part of the illustrious Phogat wrestling family from Haryana's Balali, has experienced a surge in her confidence after clinching a second consecutive gold medal at the Commonwealth Games earlier in April, as well as a victory at the Spanish Grand Prix in July. She believes her recent surge of form has put her in the right mindset ahead of the Asiad.

"I had won gold at the Commonwealth Games, which boosted my confidence a lot. I started to believe that my preparations were going well. Then I travelled to Spain and gave my best there, exhibited all that I had practiced on the mat.

"So my confidence definitely is quite high at the moment, and I am taking that confidence into the Asian Games, and I hope to give my best over there, and that the results will also be," added Vinesh.

Vinesh had earlier defeated Jessica MacDonald to clinch gold in the women's 50kg freestyle event to notch up her second gold medal at the Commonwealth Games, having beaten England's Yana Rattigan in the 2014 edition at Glasgow — then competing in the 48kg category.

However, the 23-year-old believes that the Asian Games brings with it its own set of challenges, given that there will be a number of Olympic medallists taking part at the Asian Games. She also emphasised on giving equal respect to all opponents, rather than focusing on just one opponent or a country.

"All competitions are tough. It’s just the set of opponents which changes, and brings about a change in strategy as well. The competitors will be quite strong, given that there will be a number of Olympic medallists among the contenders.

"Every match is going to be tough, so my focus will be on giving my best in every single match… It’s not as if my focus is on a single country. I have my focus on every opponent…” said Vinesh, who added that analysing videos of her rivals was a vital part of her preparation, and that she's quite aware of the strategies of some of her opponents, having faced them in the past.

Fellow grappler Sakshi Malik had recently commented on the amount of negativity that athletes are subjected to when they fail, and emphasised that sportspeople always strive for medals, and that falling short of the podium cannot always be attributed to a lack of preparation.

Vinesh too voiced her opinion on the pressure of expectations from fans, although she added that such expectations help boost her confidence ahead of high-profile events such as the Asian Games.

"Whenever you perform well in a competition, people automatically start harbouring expectations from you. People expect you to carry that performance over to the next set of events. We try to fulfill the hopes and expectations of all those who bestow their love and belief upon us.

"Seeing people invest their faith in me automatically boosts my confidence, making me believe that I have the talent. I try to bring out that talent in training, and then eventually during the match," added Vinesh.

The event at a hotel in New Delhi was attended by the entire Indian wrestling contingent for the upcoming Games, barring Sushil Kumar, as well as WFI officials. WFI chief Brij Bhushan Sharan Singh, who also happens to be the Chef de Mission for the event, added that he has high expectations of the wrestling team delivering a number of medals.

“Wrestling has always given us a good number of medals from all Games. We are expecting our grapplers to make us proud once again. I am sure they will have a better harvest this time at Jakarta than they did at Incheon Games, four years ago," said Singh.