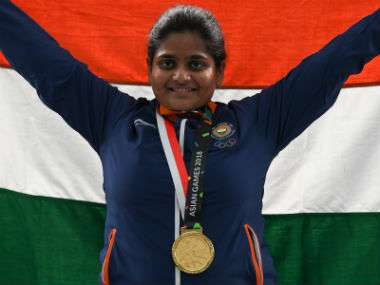 If you happen to spot Rahi Sarnobat in one of Pune’s malls, you would never guess that she is a veteran international athlete. 5’2’’, portly, with a genial manner, Sarnobat shows none of the ice-in-veins look you see on her face with pistol in hand. Pistol, not air-pistol. This one fires bullets, not pellets. The click of the ammo clip is just like the sound you hear on TV, the report much louder in real life. Make no mistake, this is a serious weapon. And this is a serious athlete.

In a field where the focus was on teenage prodigy Manu Bhaker, 27-year-old Sarnobat is the veteran who has got a second chance. She is all about second chances. Her playing style is structured that way. Start slow, finish strong, like a middle-distance runner. Get her into the final 100m in a decent position, and she will give the pace-setters a chase. Qualification is her first shot, but finals are second chances. And she makes the most of them.

On Wednesday, she did her job. All eyes were on Manu Bhaker, who aced the qualifiers with a Games record score of 593. Sarnobat snuck through with a score of 580, the joint lowest in the top eight. But once the final began, she grabbed hold of the lead, and almost throttled it.“I love finals,” she declared after winning the gold in the 25m women’s pistol. “They are always better than my qualification scores. This part of my game is my mastery; I have so much experience, if I don’t use it, what’s the point of it. This is my job.”

She started with two perfect series (five shots makes a series) and had her first miss on her 12th shot; that’s 11 shots of 10.2 or more in a row (25m pistol uses a hit or miss system. Anything over 10.2 is a hit). By the seventh series, she was assured of a medal, and till the eighth she still held the lead, though just by a point. In the ninth, the challenger showed up.

Thailand’s Naphaswan Yangpaiboon shot a perfect series, her second of the match, and Sarnobat conceded the lead with a disappointing 2. Decent shooting would have given Yangpaiboon gold, and she seemed to know it. That was her undoing; her next series was an unbelievable blank, five missed shots. Even with her third 2 in a row, Sarnobat was in a shoot-out for gold, which became another shoot-out after they both tied 4-4.

“I would have been happy with even four more shoot offs!” she laughed later. “I’m happy that I had such tough competition and then got a medal. That makes it even more special.”

It is also special because Sarnobat has been through athletic purgatory for much of 2016, having been forced away from a gun for seven months. A freak accident in 2013, when she fell on her right arm, left her with an undisplaced fracture in the radial head of her elbow. The injury went undiagnosed for a while, and she spent the better part of the next two years playing through pain.

“My elbow was not opening properly”, she explained. “It was locked, so I had to adjust my technique to that. Then, after a few shots it would open up. So again the technique would be different.” Imagine the wheel alignment of your car shifting in the middle of a drive. Now imagine trying to win a Formula One race with that car. To her credit, Sarnobat won Commonwealth Games gold in 2014 with that shifty elbow. But by 2016, she was flogging a dead horse.

An official recommended she see Mumbai-based physiotherapists Anuja Dalvi and Niranjan Pandit. The husband-wife duo chose to try treating her without surgery. They began with a cortisone injection, followed by a rehab program that resembled an iceberg: painfully slow, but inherently stable. Unlike previous rehab attempts, Sarnobat was asked not to pick up a gun while it lasted. In the most literal sense, it was insult added to injury. Through this mental and physical pain, she leaned on her support system: Sarnobat is the daughter of a Kolhapur-based contractor, and her folks live in a joint family. This meant that her mother could practically live with her in Pune, where she trained.

No return guarantees redemption. “More than technically, it was mentally difficult to come back. It was important to open my mind," she said. To that end, she hired the services of Munkhbayar Dorjsuren, a legendary shooter who was coaching both her and Heena Siddhu. Sarnobat used her government-job salary and funds from previous victories to appoint Dorjsuren her dedicated coach until the 2020 Olympics. Having the voice of a double World Champion and a two-time Olympic medalist in her ear, even during tournaments, has been decisive. It also helps that the two women share a mother-daughter-like bond; after her final, Dorjsuren was the first Sarnobat sought out to embrace.

Shooters enter their peak in their 30s, according to some coaches. Sarnobat is 27, approaching some of the most important years in her life. She now travels to the World Championships in Changwon, where she won gold in a World Cup in 2013. “Changwon is lucky for me," she said. With Olympic quotas up for grabs, there is everything to shoot for, and she will look to make the most of it. She has to.