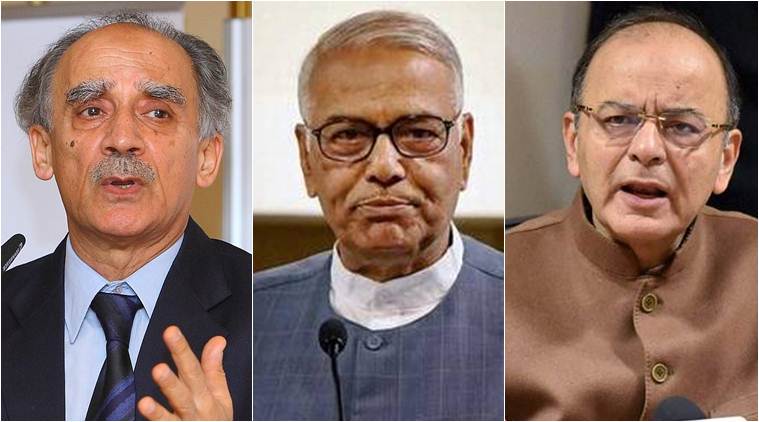 At a press meet, Shourie, Sinha and Bhushan said public sector unit Hindustan Aeronautics Limited, which was part of the original negotiations, was pushed out and a newly-minted company, Reliance Defence Ltd, bagged an offset contract.

he Opposition’s attack on the government over the cost of 36 Rafale jets that India has agreed to buy found support from new quarters on Wednesday. Former cabinet ministers in the Atal Bihari Vajpayee government, Arun Shourie and Yashwant Sinha, along with Supreme Court advocate Prashant Bhushan, alleged that the BJP-led government had agreed to buy the 36 aircraft with no additional add-ons and yet will pay Rs 1,000 crore more per plane as compared to the earlier deal.

Union minister Arun Jaitley has called the allegations an attempt to malign the government.

At a press meet, Shourie, Sinha and Bhushan said public sector unit Hindustan Aeronautics Limited, which was part of the original negotiations, was pushed out and a newly-minted company, Reliance Defence Ltd, bagged an offset contract. They said such an agreement between Reliance Defence and Dassault Aviation, which makes Rafale jets, should have come after governmental approval.

Sinha said Bofors “pales into insignificance” when compared to this “scam”. They said statements of then foreign secretary S Jaishankar and Defence Minister Manohar Parrikar suggest that none of them were aware of the new deal to buy 36 jets, against 126 aircraft as per a Request for Proposal issued in 2007, for which Dassault had been selected as it was the lowest bidder.

“Nobody in the Air Force or the defence ministry was aware” of the reduction, Bhushan said.

They also said there were no additional add-ons as per Indian specifications, as claimed by the government, compared to the original RFP. They quoted the joint statement by India and France on April 10, 2015, which mentioned that the 36 jets to be delivered by Dassault “and associated systems and weapons would be delivered on the same configuration as had been tested and approved by the Indian Air Force”.

Calling it an “enormous scandal which jeopardises national security”, Shourie asked the government to make details of the deal public. Regarding Dassault’s deal with Reliance Defence, he asked if it could have happened “without a nudge and a wink” from the government. He highlighted that offset guidelines of the government issued on April 1, 2016, mention that “all offset proposals will be processed by the Acquisition Manager and approved by Raksha Mantri, regardless of their value”.

A statement issued by the three said, “Could an experienced manufacturer like Dassault have picked a company that had no experience whatsoever of manufacturing aircraft…without the approval from the government?” It said a “private party which has had absolutely no experience in manufacturing aerospace and defence equipment has been handed an enormous financial benefit.” They demanded an audit by Comptroller and Auditor General.

Hours after the press meet, Jaitley wrote in a blog post, “There is not a grain of truth in the wild allegations repeated today nor anything substantiating in the purported facts and voluminous documents marshalled to corroborate the baseless accusations.”

He added that the allegations constitute nothing but “reprocessed lies by forces increasingly desperate to prove their relevance”. He said the government had already responded effectively to every distortion and misinformation on the issue.

“Meanwhile, those raising alarm about the alleged danger to national security ought to realise their responsibility and refrain from politicising for narrow individual ends those very matters pertaining to defence of the nation that were consistently ignored by them and by those with whom they sympathise,” Jaitley wrote.