Andheri bridge collapse: Mumbai held together by prayer and band-aid, but its fabled 'spirit' has floated away

Andheri bridge collapse: Mumbai held together by prayer and band-aid, but its fabled 'spirit' has floated away 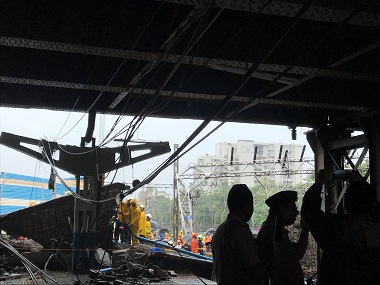 Mumbai is a city where nothing stops us from getting to work — not bomb blasts, not cloud bursts, not rains that would bring any other city down to its knees. Next morning, while the city looks like a disaster has hit, which it has, most of us have turned up to work, swapping war stories of how we braved the odds to get in.

The much fabled "spirit of Mumbai" is seen and felt by all of us who live here: The kindness of strangers, the humour of co-passengers, the "this too shall pass" attitude, the bravado of braving the bombs, the elements — knowing we have no other for support but each other. No government, no system, no infrastructure works for us, but we have grinned and borne it. But this year has been the straw that broke this camel's back. My spirit of Mumbai has gone for a hike, and I, like most of my co-citizens, am rather put out by the sheer callous ineptitude of the local authorities, state authorities, and the central government towards the city that works its heart out to feed the exchequer.

At the core of this problem is the question of who runs Mumbai. And the answer tells you why Mumbai is in the mess that it is. There are many players responsible for the horrendous conditions in which we live and work. Dirty roads, potholes, piling up of garbage, overflowing sewage, poor lighting, etc. Unfortunately, none of these players are accountable.

The first of these players is the Brihanmumbai Municipal Corporation (BMC), the authority that's supposed to deliver basic civic amenities to the population of Mumbai. But it's a bureaucracy that's stuck in a time warp circa 1950s. Its policies and measures possibly worked well for a city of approximately 4.06 million people in 1965. But today, the population of Mumbai is estimated as being over 21 million people, and the BMC is unable to cope.

The second layer of problems is the elected legislature of Mumbai. The corporator has legislative powers but its execution remains with the unaccountable bureaucrat. In an ideal world, a proactive legislature ought to be able to make some changes. However, given that the elected council for Mumbai is mostly local strongmen who are interested in increasing their own power base, this assumption of "good legislative intent" breaks down. The mayor is elected by the legislative council, and if s/he has a role beyond cutting ribbons, it has not been made clear.

Then there are successive state governments who milk Mumbai but do little. This set up is a cosy club for those who run it. It works for them. It doesn't for the people who live here.

Mumbai is frayed beyond measure. It is held together by prayer, niceness, and band aid. And unless we have some concerted action on the city, Mumbai will crumble into nothingness.

To prevent this from happening, we don't need more band aids, but a disruption of the cosy club that runs Mumbai. What we need is a CEO for Mumbai, accountable to the people of the city. Not an IAS officer who gets his/her pension no matter what they do. We need elected officials who will work with the bureaucracy to ensure that the garbage is collected, roads are clean, hospitals are functioning. And we need citizens who take a more active interest in the city.

It is also time to ask if the BMC needs to be divided into smaller corporations to become more efficient. Each with a directly elected mayor who has executive powers to deliver change in the new (smaller) city. Right now, the local government in Mumbai is like a black hole of bureaucracy, sucking all life out of the city. Maybe the best way to save the city is to break up the BMC and replace it with something from the 21st Century.

Today, as the Gokhale road-over bridge that connects eastern and western parts of the densely populated suburb of Andheri collapsed on the tracks, leading to traffic chaos and bringing Mumbai to a slow crawl, one has to ask this question: Who is accountable for this? It isn't that rains are unexpected.  It isn't unknown that creaking infrastructure in the city needs to be upgraded. It isn't a mystery that gutters need to be cleaned and roads need to be fixed. Yet, it is the same story of work not being done. It isn't done because there isn't any penalty for non-performance.

We keep talking about adapting the American presidential system for the country. We would be better off borrowing the broad structure of how their cities are run. Elected officials with executive powers to deliver real change.