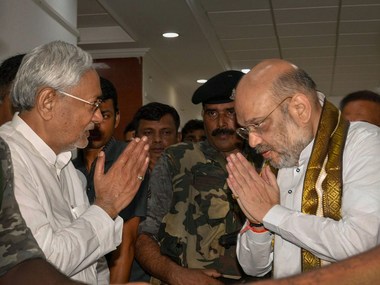 With the Lok Sabha election around a year away, it would normally be considered unwise to analyse party prospects at this juncture. But such an exercise is somewhat justified since some parties, especially the Bharatiya Janata Party (BJP), have already gone into campaign mode. Bihar is a good example and merits some attention. Recent developments in the state, especially with regard to the relationship between the BJP and the Janata Dal United — or JD(U), can be best understood in the context of the results of the 2014 Lok Sabha and 2015 Assembly elections.

As we know, under the chief minister's direction, the JD(U) jumped ship in 2017 and rejoined the NDA, clasped in the close embrace of the BJP. But the reinvented alliance has had a rocky ride, especially in the past few months. Signs of tension surfaced when riots hit Bihar during Ram Navami and Hanuman Jayanti. The son of a BJP Central minister was arrested for fomenting disturbances and senior JD(U) functionaries, including Nitish, issued dire warnings to those who were instigating communal violence. The tenor of statements made left no doubt that they were aimed at elements within the BJP and its fraternal organisations.
Matters seemed to have cooled until recently, when senior JD(U) leaders made it clear that they would not allow their party to be a junior alliance partner when seats were shared. They demanded parity based on the results of the 2015 election results and not the 2014 Lok Sabha results. In effect, their current position is that they will not settle for a smaller number of seats than the BJP. State BJP leaders did not lay down the gauntlet directly, but the general impression they gave was that this demand would not be entertained. A few days ago, BJP president Amit Shah had a meeting with Nitish, from which both emerged wearing broad smiles and exuding good-natured chumminess.

Two points need to be made in this connection. First, photo-ops are the easy part. They have no necessary bearing on the actual nature of the relationship between the parties. That will be shown up when the hard slog of allocating Bihar's 40 Lok Sabha seats between four or five allies proceeds. All sides will have to make concessions. The point now is whether the JD(U) will find itself in a position of stepping down from its stated position and whether the BJP, now used to treating its allies with barely-veiled disdain, will find it politically possible or expedient to abandon its take-no-hostages style of bargaining?

Let us return to the numbers, which all parties concerned will no doubt audit almost forensically, and which can, therefore, indicate possible developments. Nitish and his party colleagues must know that the 71 seats they picked up in the Assembly elections came on the back of a one percent increase in vote share, although their seat share went up from five percent to over 29 percent. That happened only because they were part of the Mahagathbandhan. It is doubtful whether the party will be re-admitted to it, even though, needless to say, anything can happen when realpolitik comes into play.

But the risky manoeuvre it allowed itself in 2017 has certainly weakened its bargaining power vis-à-vis the BJP. The JD(U) just cannot risk going it alone.

The BJP, on the other hand, knows that if the JD(U) cuts up rough and ends up having to go solo, it will be the party that will gain, as in 2014. In that sense, it can play hardball. At the same time, however, the development the BJP most fears is the forging of  Opposition unity, which is rapidly becoming a distinct possibility, nationwide. In that context, it cannot rule out a realignment, with the RJD, Congress and the JD(U) getting together again, this time with some smaller players also pitching in. If that were to happen, the BJP's position in Bihar would be critically jeopardised.

At this juncture, clearly, there can be no telling how things will pan out. Much will depend on the outcome of the Assembly elections in Chhattisgarh, Madhya Pradesh and Rajasthan at the end of the year. But one thing is quite clear: When the NDA partners, especially the BJP and the JD(U), sit down to play musical chairs in Bihar, none of them can take anything for granted.​