A year after lynching of man in Bulandshahr over 'love jihad' issue, victim's family members live like refugees

A year after lynching of man in Bulandshahr over 'love jihad' issue, victim's family members live like refugees 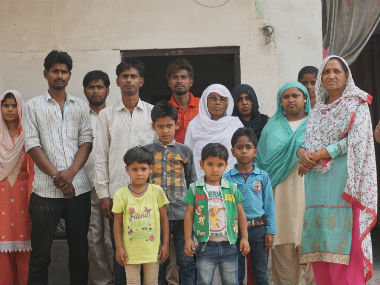 Aligarh: Sitting under the shade of a tree in scorching heat with the mercury shooting up to 43 degrees Celsius, 34-year-old Vakil Ahmad fans his year-old nephew, who has just dozed off after having mother’s milk.

Before the baby starts crying once again, Ahmad goes into a trance-like state, fretting about how he will arrange food for the child and the rest of his 16 family members tomorrow. Ever since Ahmad’s father Ghulam Ahmad was killed almost a year ago by a fanatic mob in Bulandshahr over allegations of aiding a Muslim boy to elope with a Hindu girl, the entire family has been forced to live like refugees in Uttar Pradesh.

With meagre savings, the elders of the family are finding it tough to arrange two square meals a day while the school-going children are missing out on their education.Sans food, work and peace of mind in their own village following a boycott of the family by villagers of Sohi, Vakil’s mother, brothers, their wives and children were left with no option but to migrate to Aligarh.

"The daughter of my elder brother is now depressed as she did not get admission in Class 10 because the school where she was studying did not give us the transfer certificate and now, no school in Aligarh is entertaining us," rues Vakil, who used to work as a carpenter while his brothers were farm labourers. Now, all are unemployed.

With tears in his eyes, Vakil narrates the story of the cruelty bestowed upon them during the last summer. On 2 May, his father was guarding a mango orchard in Pahasu when he was allegedly attacked by a group of Hindu Yuva Vahini (HYV) men. "They beat him in every possible way and he died after that,” says Vakil.

He says that day didn't witness murder of just one family member; the whole world turned upside down for the rest of the family too.

"We were happy having one chapati less in the dinner but the family was together. We had our father, who looked after all our needs. He did everything to keep us all happy but we could not save him from the goons who killed him in the name of Hindutva," he says with a choked throat.

"After killing my father, they rushed towards our house and our family was informed by the villagers that they are now coming to kill us. We were advised to run away to save our lives. After female members of my family were harassed, molested and threatened, we decided to come to Aligarh," Vakil says, explaining how reluctant they were to leave the village where they were born and brought up.

Vakil's sister-in-law (elder brother's wife), who was also harassed while running for life from the village, says that the members of the Hindutva group did whatever they could without giving any second thought.

"These people call themselves Hindu but how can anybody be a Hindu when he/she does not have any fear of god? They groped us, twisted our wrists, slapped us and touched us inappropriately. They even tried to snatch our jewelry. They beat us black and blue. We would have died that day if we had not run away from our home," says Sabeena (name changed).

"They have nothing to eat. No extra pair of clothes or enough food to store for the next day. Vakil and his brothers are jobless for more than a year and no one has come to help them,” says Naeem, while praising the fighting spirit of the family for pursuing the matter legally.

"The next date of hearing has been fixed for June 7 and we will provide all the evidence that we have. We are sure that the family will get justice and even the police are cooperating with them since the FIR was lodged,” says the lawyer, who is not charging any fee in the case.

No proof against Hindu outfit

Although it is not certain whether any Hindu outfit was involved in the murder, Bulandshahr police officials say they have enough evidence against the accused.

“The accused belong to a different community. We did not get anything related to Hindu Yuva Vahini as alleged. The outfit has also denied its involvement. The police have explored all angles and this seems to be just a case of cold-blooded murder and nothing else," says Rajesh Singh, the investigating officer of the case.

Sunil Singh, the second in-command of the Hindu Yuva Vahini, has also refused to accept any involvement in the killing owing to the angle of ‘love jihad’.

"We have cooperated with the police and in our internal investigation, we found that those accused of murder were nowhere linked with us,” says Singh. However, he doesn’t stop short of admitting that the deceased victim was aiding a case of so-called ‘love jihad’ for which action should be taken against the family.