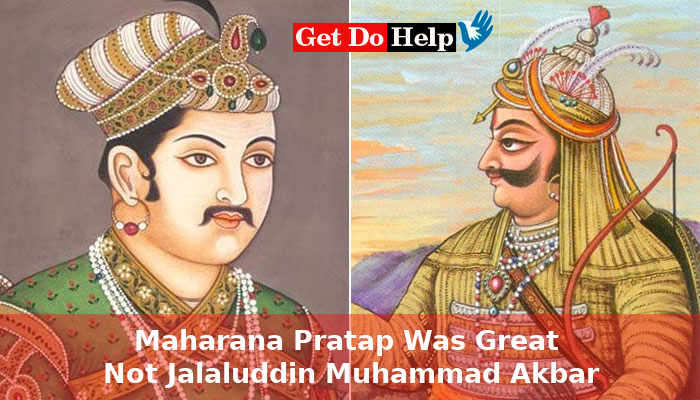 Maharana Pratap was a renowned Rajput warrior and a king of Mewar, Rajasthan, in north-western India. One of the greatest Rajput warriors, he is recognised for resisting the attempts of the Mughal ruler Akbar to conquer his territory. Unlike the other neighbouring Rajput rulers, Maharana Pratap repeatedly refused to submit to the mighty Mughals and continued fighting courageously till his last breath. A symbol of Rajput gallantry, diligence and valour, he was the only Rajput warrior to take on the might of Akbar, the Mughal Emperor. For all his courage, sacrifice and fiercely independent spirit, he is honoured as a hero in Rajasthan.

Maharana Pratap (9th May 1540 – 19th January 1597) was the 13th king of Mewar, Udaipur from Sisodia Rajput family. His name was Pratap Singh and later on he popularly known as Maharana Pratap. He was the eldest son of king Udai Singh II (Son of Rana Sanga) and Jaiwanta Bai. His younger brothers were Shakti Singh, Vikram Singh and Jagmal Singh. Pratap also had 2 step sisters : Chand Kanwar and Man Kanwar. He was married to Ajabde Punwar of Bijolia.

After the death of Udai Singh II in 1572, Rani Dheer Bai (known as Rani Bhatiyani) wanted her son Jagmal to succeed him but senior courtiers preferred Pratap, as the eldest son, to be their king. The desire of the nobles prevailed. Maharana Pratap ‘s childhood name was Kika.

Maharana Pratap was bold and brave right from his childhood and everyone was sure that he was going to be a very valiant person as he grew up. He was more interested in sports and learning to wield weapons rather than general education. Self-respect and virtuous behaviour were the main qualities of Maharana Pratap. He was a stand alone fighter against Mughal aggression and never bent down to any temptation.

By mid 1500s, the Mughal Emperor Akbar, due to his desire to rule all over India, continued his conquests of several Rajput kingdoms. During Maharana Pratap’s time, Akbar was the Mughal Ruler in Delhi. His policy was to make use of the strength of Hindu kings to bring other Hindu Kings under his control. Many Rajput kings abandoning their glorious traditions and fighting spirit, sent their daughters and daughters-in-law to the harem of Akbar with the purpose of gaining rewards and honour from Akbar. Nearly all Rajput kingdoms had surrendered to Akbar and his rule, except Mewar. This was the only Rajput kingdom, under the able leadership of Rana Pratap, which was not willing to compromise on its independence.

With the neighboring states allying with Akbar, Pratap had a difficult time resisting the Mugahls as he had no capital. Akbar sent Man Singh as his emissary to invite Pratap in a dinner but the main aim was
to seek a negotiation to come to a peaceful alliance. Pratap refuse to attend personally and sent his son Amar Singh instead.

After waiting for almost 3 years for Mewar ruler's submission, Akbar sent Raja Man Singh of Amber to have talks on peace treaties and persuade Rana Pratap Singh to submit. However, Rana Pratap agreed to sign the treaty on his own terms and conditions. His condition was that he would not come under or tolerate the leadership of any ruler, especially the foreigners. This incident soured the Mughal-Mewar relations even more and the Battle of Haldighati (1576) soon followed. 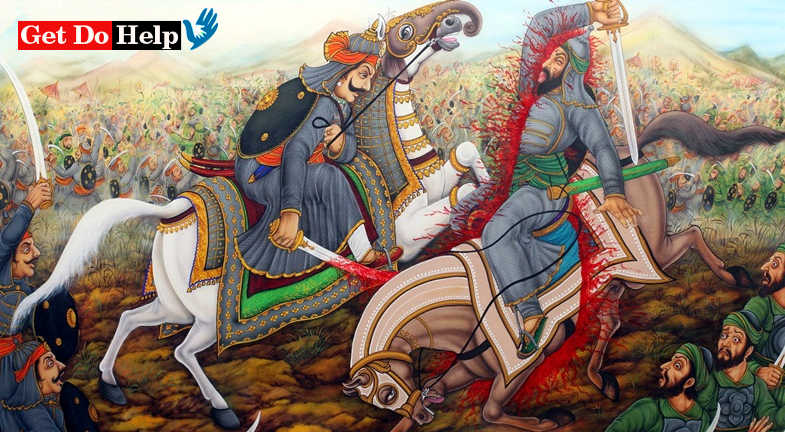 Akbar tried his best to bring Rana Pratap under his clutches; but all in vain. Akbar got angry as no compromise could be arrived at with Rana Pratap and he declared a war. Rana Pratap also started preparations. He shifted his capital to Kumbhalgarh in the Aravalli range of mountains which was difficult to access. He recruited tribal people and people dwelling in forests in his army. These people had no experience of fighting any war; but he trained them. He appealed to all Rajput chieftains to come under one flag for Mewar’s independence.

This battle is considered as one of the most significant events in the history of the Rajputs, and this battle was also one of the shortest battles in Indian history, which lasted for only 4 hours.

The Battle of Haldighati was fought on 18 June 1576 between Maharana Pratap and Akbar's forces led by Man Singh I of Amer. Maharana Pratap fielded a force of around 3000 cavalry and 400 Bhil archers. The Mughal’s were around 5000-10,000 men. Akbar’s had a numerical advantage over Pratap’s army but he fought valiantly to resist them.

Akbar felt that Rana Pratap won't be able to fight the large Mughal army, as he did not have the experience, resources, men and allies. But, Akbar was wrong. A small army of the Bhils tribe, the Tanwars of Gwalior, the Rathores of Merta joined the battle against the Mughals. Rana Pratap also had a group of Afghan warriors, led by commander, Hakim Khan Sur who joined him in the battle. These were the many small Hindu and Muslim kingdoms which were under the rule of Rana Pratap. All of them wanted to defeat the Mughals. The Mughal forces, no doubt, were a larger army, which vastly outnumbered the Rajputs.

It was a fierce battle; both the forces put up a brave fight. Mughals were in fact taken aback by surprise by the attacks from Rana Pratap's men. Many Mughals fled away without fighting. The Mewar army attacked the Mughal army in three parallel divisions. Realising the failure of the Mughals, Man Singh moved forward to the centre with full vigour to attack Rana Pratap, who at that time was commanding the centre of his small army. By this time, the Mewar army had lost their momentum. Slowly, the Mewar soldiers started falling. Maharana Pratap on his horse Chetak kept on fighting against Man Singh. But, Rana Pratap was heavily wounded by the continuous hit of the spear and arrows by Man Singh and his men. During this time, his aide, Maan Singh Jhala took the silver chattra from Pratap's back and placed it in his back. Wounded Rana Pratap fled away from the Mughal army and was saved by his brother Shakti Singh. Man Singh in the meantime killed Maan Singh Jhala thinking him to be Rana Pratap. He was taken aback when he came to know that he had actually killed one of Rana Pratap's trusted men. Next morning, when he came back again to attack the Mewar army, no one was there to fight the Mughals.

Along with Rana Pratap, his faithful horse named ‘Chetak’ also became immortal in this battle. ‘Chetak’ was seriously injured in the battle of Haldighati but to save his master’s life, it jumped over a big canal. As soon as the canal was crossed, ‘Chetak’ fell down and died thus it saved Rana Pratap, risking its own life. The strong Maharana cried like a child over the death of his faithful horse.

Even today, the battle's result is considered indecisive or it can be considered as a temporary victory for the Mughals. The battle was "a glorious defeat" for Mewar. Pratap faced extreme hardship living the life of a fugitive but never gave up his struggle for freedom. Akbar tried to catch Maharana Pratap many times but always he failed.

Akbar sent another great warrior General Jagannath in the year 1584 with a huge army to Mewar but after trying relentlessly for 2 years, even he could not catch Rana Pratap.
Haldighati was a futile victory for the Mughals, as they were unable to capture Maharana Pratap, or any of his close family members in Udaipur.

Wandering in the jungles and valleys of the mountains, Maharana Pratap used to take even his family with him. There was a constant danger of being attacked anytime from anywhere. Getting proper food to eat was an ordeal in the forests. Many times, they had to go without food. They had to wander from one place to another without food and sleep in the mountains and forests. They had to leave the food and immediately proceed to another place on receiving information about the enemy’s arrival.

There was a Rajput chieftain ‘Bhamashah’ serving as a minister in the regime of forefathers of Maharana Pratap. He was very much disturbed with the thought that his king had to wander in forests and was going through such hardships. He felt sorry to know about the difficult times Rana Pratap was going through. He offered a lot of wealth to Maharana Pratap that would allow him to maintain 25,000 soldiers for 12 years. After receiving wealth from Bhamashah, Rana Pratap started receiving money from other sources. He used all the money to expand his army and freed Mewar except Chittod which was still under the control of the Mughals.

Implications of the battle

After Haldighati battle, Mughal were in pressure due to rebellions in Bengal and Bihar and Mirza Hakim's incursion into the Punjab. In 1582, Maharana Pratap attacked and occupied the Mughal post at Dewair. Dewair Battle was very important because Maharana Pratap got his Mewar once again from Mughals. In 1585, Akbar moved to Lahore and remained there for the next twelve years watching the situation in the north-west. No major Mughal expedition was sent to Mewar during this period. Taking advantage of the situation, Pratap recovered Western Mewar including Kumbhalgarh, Udaipur and Gogunda. During this period, he also built a new capital, Chavand near modern Dungarpur.

The great warrior left for the heavenly abode on 29th January, 1597, at the age of 56, as a result of injuries sustained during his incessant struggle against the Mughal Empire. His eldest son, Amar Singh I, succeeded him to the throne of Mewar.

Today, the Haldighati pass, in which the battle took place, stands as a tourist spot, with great memoirs of Raja Rana Pratap Singh and his brave horse Chetak.