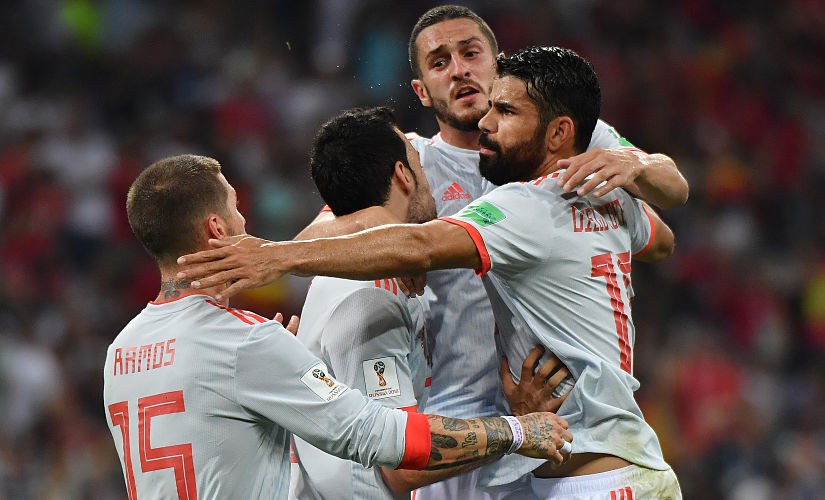 Cristiano Ronaldo is unstoppable. Spain had to learn it the hard way on Friday as the Portuguese skipper netted a hat-trick to earn his side a crucial point in their 2018 World Cup opener. He began the evening having never scored against Portugal’s Iberian rivals, but ended it with three goals to his name against their neighbours.

A breathtaking free-kick in the 88th minute left Spanish goalkeeper David de Gea rooted to his spot, and many around the world dumbfounded. A game that seemed safe in Spanish pockets was rescued in a flash. Spain were left licking their wounds as the draw felt like a defeat. But should it?

Records were broken. Ronaldo became the oldest player to score a hat-trick in the World Cup finals, and the first ever in the competition’s history to score one against Spain. The Portuguese became just the fourth player player to score in four consecutive World Cups and the only one to score in eight successive major international events.

Under the shadow of Ronaldo’s achievements, Spain carved out a record of their own. La Roja became the first ever football team at club and international level to concede a hat-trick to Ronaldo, and still not be on the losing side. With club and country, all of Ronaldo’s 50 hat-tricks have seen him end up on the winning side until Spain had the honour of ending that streak.

The result thus speaks volumes about Spain’s performance. It also highlights Portugal’s shortcomings, but it’s unfair to take anything away from Spain, who had the worst possible preparation to the game. Coach Julen Lopetegui was sacked about 48 hours prior to the game, and Fernando Hierro, who has little coaching experience, was put in charge. The change of that magnitude was bound to affect the team, but Spain after recovering from an early hiccup — Ronaldo’s opener — showed no signs of any hangover of the Lopetegui saga.

In fact, La Roja seized control of the game after Diego Costa’s equaliser in the 24th minute. Just before Ronaldo’s second goal stunned the Spaniards in the 44th minute, the 2010 champions had the best spell where they played some delightful football, often leaving the Portuguese rearguard in their wake. In the 21st minute, Andres Iniesta beautifully combined with Jordi Alba to get behind the deep Portuguese backline from the left side. His cut back from the goal line was met by David Silva whose effort rolled inches wide of the post.

Later in the 35th minute, after a sublime passing move that saw Spain move the ball at a stunning pace, Iniesta fired a cross from the left hand side wide. Spain were getting into their groove until De Gea’s howler broke their momentum.

Spain impressed in flashes and were in control for most part of the second half, but the biggest positive for Spain to take home was Costa’s goals. Before Friday, the former Chelsea striker had scored just 7 goals in 20 matches for La Roja. He had a World Cup to forget in 2014. Although he registered his maiden goal for Spain in that very year, he had to wait for two more years for his second goal in national colours to arrive.

Costa’s goal-scoring statistics with La Roja were a stark contrast to his club record were he had been prolific with both Chelsea and Atletico Madrid. On a couple of occasions, Costa had been jeered off the pitch by the Spanish crowd after underwhelming performances for the national team.

However, faith put in him, initially by Lopetegui and later by Hierro saw him start the all-important game against Portugal. With his side 1-0 down, Costa did what he does best. Rattle the opposition defence by his physicality and create an opening out of virtual scratch.

Costa challenged a hopeful long ball in the 24th minute and beat Pepe to it. The Brazii-born Spanish striker showed great strength to win the aerial battle before twisting and turning to create space for the shot. Once he made the slightest of openings, Costa’s predatory instincts took over and the ball was in the bottom corner.

A game that was all Portugal’s till the point, was single-handedly turned by Costa’s tenacity. He is a type of centre-forward that Spain had lacked over the years. La Roja either had more of skillful, technical strikers in David Villa and Fernando Torres or preferred to play with a false nine. A center forward of Costa’s type was considered a misfit to Spain’s tiki-taka style of play, until Friday when Costa finally proved to be an excellent foil for Spain’s possession-based game.

Not only did the Atletico Madrid forward gave the Spanish technicians a focal point to build attacks, it provided Hierro’s men with an alternative route to goal. The first goal that was all of Costa’s doing was a prime example. A Spain of the past would have never scored that goal.

The second goal highlighted Costa’s predatory instincts. He was at the right place and the right time to tap home a cushioned header from Sergio Busquets. Usually Spain preferred to take their free-kicks short, but with Costa on the field, it gave Spain an added alternative of going direct,

Costa’s goals came at a time when Spain were thrown off their rhythm and needed some inspiration. While Portugal toiled hard to close the doors for Spain’s master technicians to breach them, the direct route that Costa provided ultimately proved effective.

Costa, playing in his second World Cup, didn’t have a single shot on target in the tournament’s history before Friday, by the end of which Costa had scored twice off his first two.

Spain might have been undone by Ronaldo’s genius in the end, but there were plenty of signs that Hierro’s men have the potential to go all the way in the tournament. Costa’s return to goalscoring form in national colours being one of it.

A makeshift coach, an early Ronaldo goal, an unlikely howler from De Gea — world’s best goalkeeper — at the stroke of half time. Spain had a lot going against them. In the end, a strong performance under circumstances can be considered good for starters. For sure, there’s more to come from this Spain team as the tournament progresses. So even with a defence that looked far from convincing on Friday, La Roja will be force to be reckoned with in Russia unless they once again bump into Ronaldo, who’s a bit too keen to push perfection to its limits.