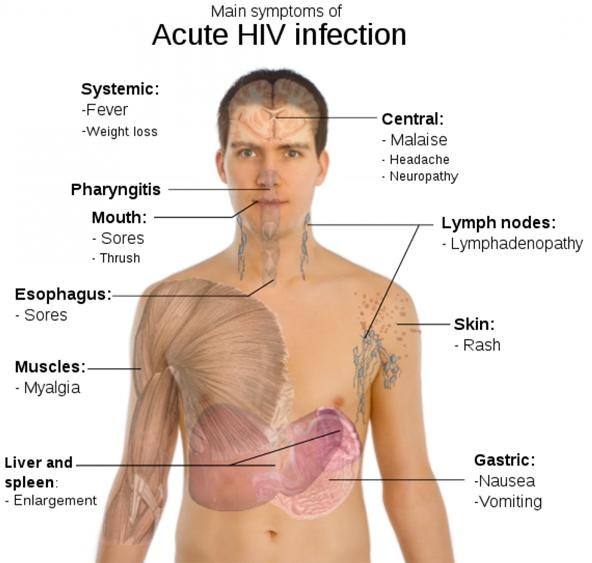 AIDS is a disease of human immune system caused by infection with human immunodeficiency virus (HIV). The initial symptoms of this disease may be a brief period of influenza like illness. AIDS is a disease which may be continued a prolonged period without any symptoms. As the infection progresses, it interfere more and more with immune system and makes the infected person so weak to get susceptible to common infections like Tuberculosis, tumors and other general infections.

The HIV virus attacks on the T-cells in the immune system and makes your body so weak that it can be easily affected by bacteria, virus and fungi. In starting weeks, it can show symptoms like headache, fever, sore joints and muscles etc. AIDS is the extreme condition of this infection. When the infection spread, it attacks on the human immune system making it harder to fight with diseases even normal infections.

The HIV infection is divided into three stages;

Chronic HIV Infection: This is the second stage of HIV infection. In this stage, the immune system loses battle with HIV and the flu like symptoms disappear. The other symptoms may take months or years to appear. Doctors call this stage asymptomatic or clinical latent period. In this stage, the virus starts replicating in the body that gradually weakens the immune system. You may not look or feel sick, so there are chances that you can pass HIV to others. So, the early testing for HIV is very important, even if you are feeling fine.

AIDS/Advanced Infection: This is the third and advanced stage of HIV infection. In this stage, your CD4 T-cell number goes below 200 and your immunity decreases drastically that make you more susceptible to opportunistic infections.

Aids can be transmitted from person to person in many ways:

Aids can be transmitted from person to person in many ways: